Home loudspeakers Opinion: "The place of a real man is in the kitchen!" - more and more Americans think

Opinion: "The place of a real man is in the kitchen!" - more and more Americans think 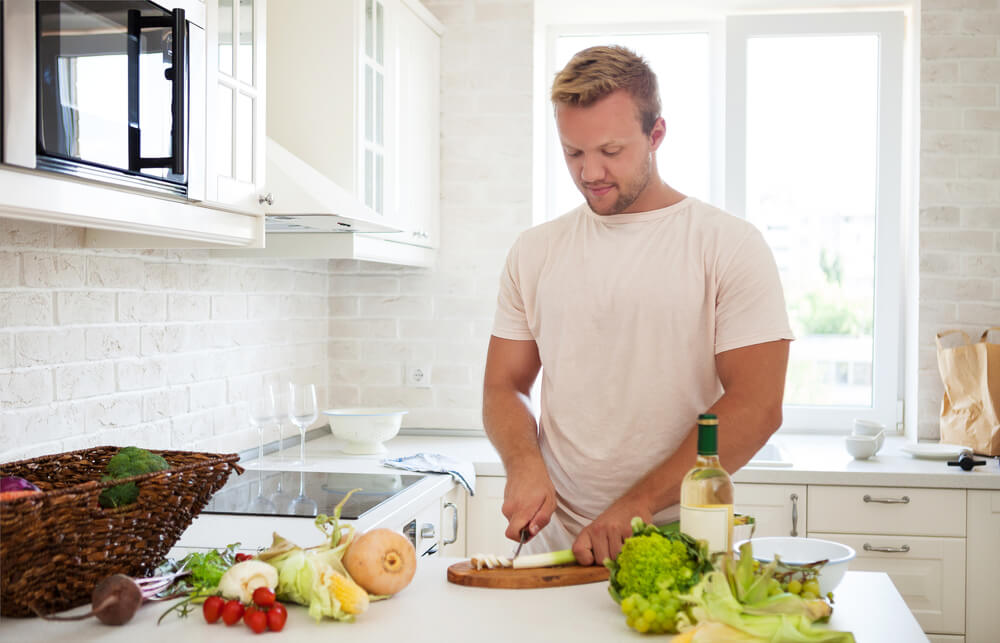 American men are more and more engaged in cooking and less and less regard it as a purely women's business. Daddy, who can not only barbecue on Independence Day, but also prepare a dinner in the middle of the week - not such a rare beast, although it is no less valuable, he writes in his blog for “VOA”Tatiana Vorozhko.

University of Michigan staffwho have studied the habits of 3 thousands of members of the generation Х (1961-1981 years of birth), found that men began to go more to grocery stores, cook, share recipes and watch cooking programs. On average, a married woman cooks 12 dishes a week, alone - 10, a married or single man - 8. But among the younger cohort, milileals (those born after 1981), about the same number of women and men are responsible for preparing food (fully or partially).

Generally, University of South Carolina researchers estimate, in 2015, 43% of all men were engaged in cooking, spending on average 49 minutes per day, which is 14% and 8 minutes more than in 1965. Women in the US today cook a little more than in the 95 year, but much less than in the 1965 year.

Let's try to understand the reasons

Let us dwell on global trends that make the entry of men into the kitchen faster and more massive.

Men cook more for the same reasons as walking with children or doing other homework. The attitudes, the division of labor, the ideas about what a real woman and a real man should be and what should be done, based on the needs and characteristics of the agrarian period, are becoming less relevant in the post-industrial time.

The obligations that have been dictated by traditions over thousands of years become an individual decision and the result of the compromise of each individual pair.

Also attached is the fact that flexible working hours and work from home is becoming increasingly popular in the US, but not for everyone and not equally. In the Ukrainian service of Voice of America, for example, three men who have a family and children and take on cooking dinner in the middle of the work week work from home or on a flexible schedule, and wives spend 2 hours or more on the way to work and back .

However, unlike changing diapers or washing the floor (some men do this), cooking is considered a more creative, fashionable and prestigious occupation.

The influence of mass culture is important. Even if the bosses of the Italian mafia (“Glorious Guys”, “Clan Soprano”) do not disdain to cut vegetables, then why should the postman or manager consider this a non-male business?

But all Hollywood films, where you can see men at the stove or barbecue, can not be compared with the influence of the television channel Food Network and the emergence of the star chefs phenomenon. Over the past 20 years, it has become a prominent cultural phenomenon in the United States.

Traditional formats of culinary shows, where the presenter tells and shows how to prepare this or that dish, give way to programs where cooking is served almost like an Olympic sport, a complex scientific or business project.

In the American "Iron Chef" (the format itself appeared in Japan), participants have to prepare four dishes for a limited period of time, using a given ingredient in each of them. All this is commented in the manner of a football match, and the name itself refers to the competition of the super-triathlon "Iron Man". The big hall where the competition takes place is the kitchen stadium. In the show, the stars of the channel and those who challenge them compete. In case of victory, the "beginner" receives the status of "Iron Chef" - almost a black belt in karate, and joins the pantheon of culinary "gods". Most of these "gods" are men. In addition, the statistics of the victories of "iron chefs" are kept - everything is like in sports. And the host is a martial arts master.

On the TV channel 16 competitive programs. In 2005, in a competitive format, there were only two cooking shows.

Competitions take place from the very food - in the show “Man vs. Food” by Adam Richman. He travels around the country and "on the weak" eats an incredible amount of food. I can't watch this: one portion, which he chokes under the cheering of the crowd, you can feed the whole village.

Alton Brown's program, meanwhile, shows cooking as a complex interdisciplinary research project. Briton Gordon Ramsay, American Robert Irwin and others in various variations of the show save bars and restaurants from bankruptcy, and there is nothing feminine about how they do it, especially in the case of Ramsay.

Even if a person has never watched these shows, the names of the biggest stars are known to him - just as the names of pop stars and sports are familiar to people who are not very interested in new popular music or the results of recent competitions.

Bobby Fleu, Mario Batali, Michael Simon, Anthony Bordein, British Jamie Oliver and Gordon Ramsay, Wolfgang Puck, Tyler Florence, Rachel Ray, Guy Fueri are not limited to television. They open restaurants, give out personalized cookbooks, advise, participate in other projects. Most come to television, having already made a name in the restaurant world, but having received their own show or competing in Iron Chef, they become real stars of American pop culture.

Everything is in order with them and in material terms. The richest of them - Wolfgang Pakwhose fortune is estimated at $ 400 million. His company controls 21 restaurant, a food delivery business, more than 50 cafés; sells products for the kitchen, food and cookbooks.

Jamie Oliver with a fortune of $ 172 million - one of the richest people in the UK. Tyler Florence is “valued” at $ 50 million, Bobby Flay is at $ 6 million.

Of course, as in the case of football fans, a person can watch the competition in the kitchen stadium with passion and not know how to turn on the hob. But if a little boy shows interest in cooking, fewer and fewer parents will want to say: “What are you, girl? Go better - take a hammer in your hands. ”

Apart from these reasons, for my husband, who is a great cook, cooking is also about creativity and the feeling of creating a complete product. He is working on business agreements that have been negotiating for months. And dinner is a product that is guaranteed to have grateful customers right now - me and my son. And I, I think, was just lucky.

Translation of the blog has prepared the edition “New time".

How does a Ukrainian prepare unique 3D desserts in her kitchen?

men in the USA