Home In the U.S. Americans do not want to fly on the aircraft model, which crashed in Ethiopia

Americans do not want to fly on the aircraft model, which crashed in Ethiopia

Southwest and American Airlines, the largest US carriers that have Max 737 in Boeing 8, do not intend to abandon the use of this aircraft model, despite two fatal accidents in less than five months. 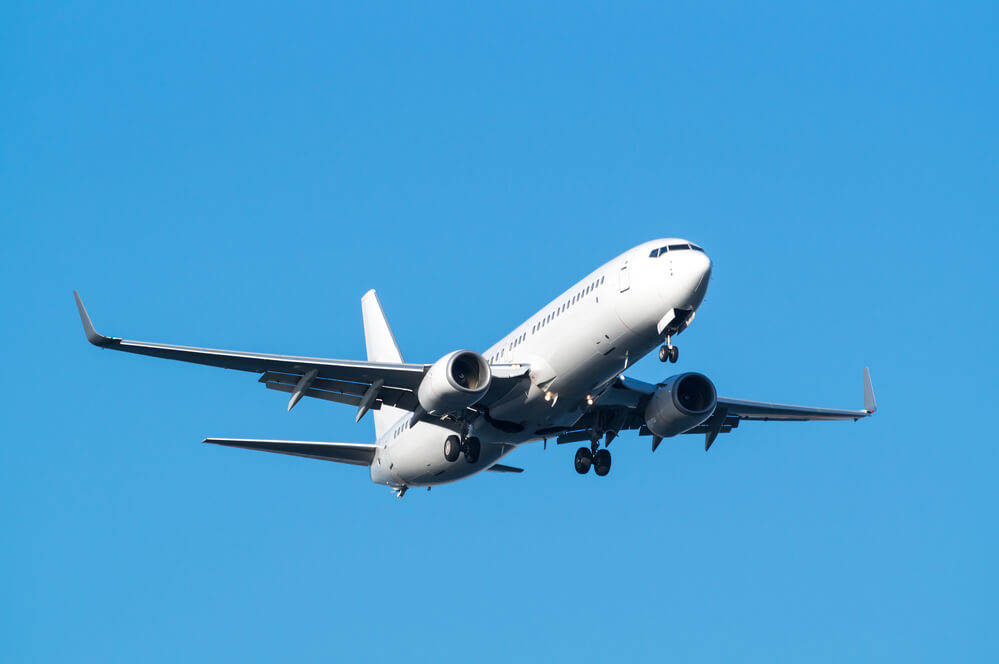 At the same time, more and more airlines are suspending the use of the Boeing 737 Max 8 after the crash in Ethiopia.

After the Sunday disaster, more and more passengers in the US are expressing their concern about the situation.

A woman from California with Southwest Airlines tickets to Portland, Oregon asked the airline what type of aircraft would be on the route.

A passenger who recently purchased Southwest tickets experienced similar concerns by telling the airline on Twitter that no one in his family wants to fly the Boeing 737 Max.

Southwest responds differently to concerned travelers, but it all comes down to the fact that the company intends to continue to use this model aircraft.

“We remain confident in the safety of our fleet of more than 750 Boeing aircraft,” the airline said in a response Monday morning. "Southwest has completed approximately 31 flights using the Boeing 000 Max, and we plan to operate these aircraft in the future."

Southwest Airlines has 34 175 seats in Max 8 and plans to more than double this number this year, as well as add its first Boeing Max 7.

The representative of Southwest Airlines, Chris Mainz, said that the airline is in contact with Boeing and will continue to monitor the investigation.

“We remain confident in the safety and airworthiness of our fleet of more than 750 Boeing aircraft,” he said.

Passengers will be able to find out what type of aircraft will be involved for a particular flight, only one day before the trip.

American Airlines, whose fleet includes 24 Max 8 from almost 1000 aircraft, also supports this model aircraft. The airline tells travelers who ask questions about this on Twitter that it is “completely confident” on the plane and the abilities of their flight crew. 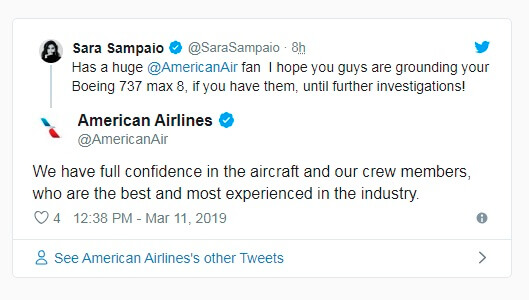 "We will closely monitor the accident investigation conducted by Boeing and the National Transportation Safety Board."

American Airlines does not allow travelers who are concerned about the type of aircraft to change the date and direction of flight without additional charges, as is usually the case during winter storms and other serious disruptions in flight.

One traveler from New York wrote on Twitter that this was a “refusal to serve customers,” especially since other airlines ground this type of aircraft.

Southwest Airlines also did not change its policy, Mainz said. Unlike its competitors, Southwest does not charge for changing a ticket.

United Airlines does not have Max 8 in its fleet, but it does have 14 Max 9. On Twitter, the airline reassures passengers, saying that it will try to find alternative options for those who do not want to fly this Boeing model.

Recall Boeing Co saidthat set aside the scheduled ceremonial debut of its wide-body 777X aircraft after the crash of Ethiopian Airlines.

Aircraft Ethiopian Airlines, flying from Addis Ababa to the capital of Kenya, crashed Sunday morning. All 149 passengers and 8 crew members died. Among the dead - Representatives from 35 countries.

At the end of October last year, the Boeing 737 MAX 8 of the Indonesian company Lion Air fell to Javan Sea shortly after departure from Jakarta airport. 189 people died.

Then the pilots could not cope with an automatic system that prevents the nose from tearing up the aircraft, the loss of thrust and the breakdown in the tailspin. The system, as the investigation showed, constantly lowered its nose, even when the plane did not lose its thrust. The pilots tried to rectify the situation, but the automation more than 20 times did not let them do it.

Problems with flight control sensors that emerged in the collapsed Boeing 737 Max, 250 liners of this series may also occur.

The Boeing 737 MAX is the fourth generation of the Boeing 737, which replaces the Boeing 737 Next Generation. The first flight of this model took place in January 2016. The aircraft can carry 162-175 passengers.

How to fly almost for free: everything about bonus miles

In 2018, the death toll in air crashes rose sharply

Safest airlines in the world