Scientists at Harvard University have published a new study claiming that the interstellar object Oumuamua is not a comet. "Focus". 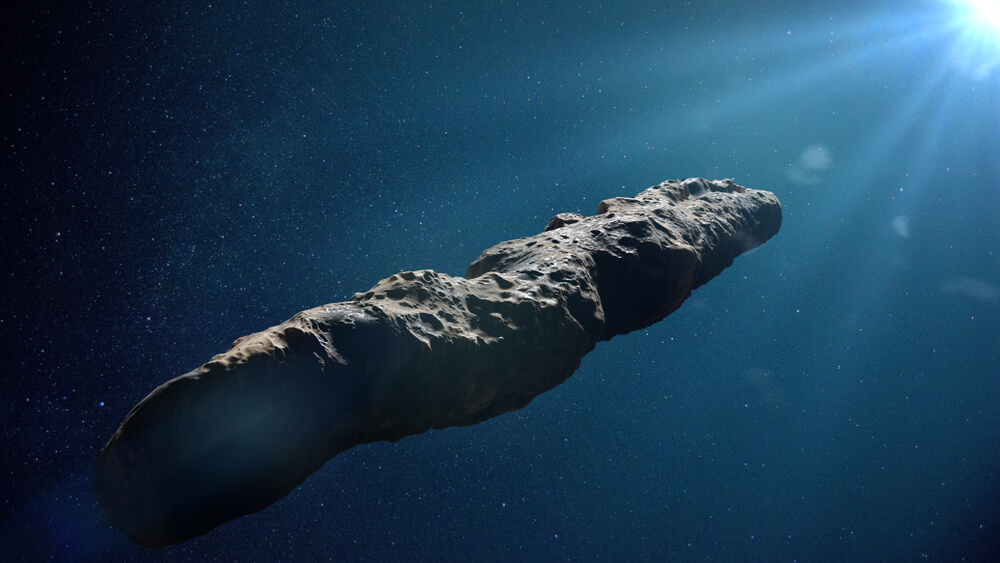 The mysterious interstellar object Oumuamua, which entered the solar system two years ago, may turn out to be alien technology. In a new study, scientists at Harvard University say other explanations for the phenomenon simply do not hold water. This is reported by Space.com.

In 2018, an object from interstellar space appeared in the solar system. It was named Oumuamua and had a cigar-shaped shape. During observations, scientists found out that a strange object is accelerating, as if something is pushing it. Until now, researchers cannot find an explanation for what they saw.

One of the available theories is that Oumuamua set in motion an alien mechanism similar to a light sail. The device is only a millimeter thick and can accelerate it by solar radiation. The main proponent of this theory is the astrophysicist from Harvard University Avi Loeb.

But most other scientists believe that the acceleration of Oumuamua was the result of a natural phenomenon. In June, a team of researchers suggested that solid hydrogen, when exposed to sunlight, is ejected from the surface of an object by steam, giving it acceleration.

In a new paper published in the scientific journal The Astrophysical Journal Letters, Avi Loeb and an astrophysicist at the Korea Institute of Astronomy and Space Sciences Tim Hoang put forward their theory.

They argue that the hydrogen hypothesis, while convenient, is unrealistic.

“Oumuamua was the first object to enter and leave our solar system. This phenomenon is contrary to what we usually see. Most objects in the solar system revolve around the sun, never leaving the vicinity. The object's travel and the fact that it was accelerating suggests that Oumuamua was a comet between 400 and 800 meters in size. Yet there was no tail or evidence of gas emanating from the object, ”says astrophysicist Darryl Seligman, author of the solid hydrogen hypothesis.

He recalled that usually comets come from regions farther from the Sun than asteroids. Ice on their surfaces turns to gas as they approach our star, leaving behind a trail of gas that we see as a comet's tail.

Seligman says the release of gases changes the way comets move in space. The phenomenon is a bit like a slow rocket engine. The sun heats up the comet, and its warmest part explodes with gas, which pushes the object faster and faster away from the Sun.

In their study, astrophysicist Seligman and Gregory Laughlin of Yale University suggested that the object is a comet, partially or completely composed of molecular hydrogen - light molecules containing two hydrogen atoms (H2).

Gas (H2) turns into a solid only at very low temperatures - minus 259,14 degrees Celsius. According to scientists, such "hydrogen icebergs" can form in very cold corners of space. And the released hydrogen will not be visible from the Earth, and the comet will be left without its tail.

But Harvard scientists in their article refute this theory, as it has one big problem. Comets appear when icy dust particles collide with each other in space, forming clumps that continue to attract dust and other clumps. Loeb notes that comets are like snowmen that melt sooner or later.

The stickiness that helps form comets is similar to the stickiness of ice cubes in a freezer. If the ice is left on the table for a couple of minutes, then it heats up and loses this stickiness. A thin film of liquid water on the surface of the cube will make it slippery.

Hoang and Loeb say starlight from even the most distant parts of space will heat particles of solid hydrogen before they can cluster into an Oumuamua-scale comet. And more importantly, the path from the nearest molecular cloud in which the object could appear is too long. A hydrogen iceberg, traveling hundreds of millions of years through interstellar space, would fall apart under the influence of starlight.

“Hydrogen icebergs don't live that long in the galaxy. They will definitely not have enough time to make this way out of the giant molecular cloud, ”Seligman agrees with Loeb's analysis.

Seligman confirms that his theory only works if Oumuamua is only 40 million years old. During this time, the gas leak was able to form an oblong comet without destroying it completely.

He referred to another study that identified several nearby likely birthplaces for Oumuamua. It is believed that the object could have appeared alongside two groups of young stars - Carina and Columba. All of them formed 30 to 45 million years ago in a cloud of gas, which then dissipated. In this small, scattered cloud of molecular gas with a few young stars, hydrogen icebergs are capable of forming.

“There are many processes that can push Oumuamua-like objects out of groups of young stars. For example, gravitational shocks between stars, planet formation. All theories fit together nicely, assuming that Oumuamua was a hydrogen iceberg that originated in Carina and Columba. The idea is that a birthplace in Carina or Columba would indicate Oumuamua is young enough to survive the journey, ”reads that scientific article.

On the subject: 'More than we expected': a growing number of pilots claiming to have encountered UFOs

But Loeb disagrees with this point of view.

“Reducing the distance that the H2 iceberg needs to travel does not solve the problems described in this article. Because the iceberg H2 should have formed together with its parent planetary system - billions of years ago, and during that time the iceberg would have evaporated, ”says Loeb.

He stressed that hydrogen icebergs are believed to come from giant molecular clouds, not parts of space like Carina and Columba. Loeb reiterated that no such iceberg could survive the journey from a nearby cloud to the solar system.

When asked if there was an explicit explanation for the acceleration of Oumuamua, Loeb replied that, in his opinion, humanity saw the first sign of intelligent life beyond Earth. The scientist is going to publish a book with his hypothesis in January 2021.