Home At home Giuliani's Kiev adventures: with whom Trump's lawyer managed to meet and what they talked about

Giuliani's Kiev adventures: with whom Trump's lawyer managed to meet and what they talked about

On Wednesday, it became known that Trump's personal lawyer Rudi Giuliani arrived in Kiev to meet with current and former Ukrainian officials. With whom did he manage to see and what were they talking about?

Giuliani’s visit to Kiev was not announced in any way - the New York Times was one of the first to report on it.

According to the publication, Giuliani came to Ukraine to collect evidence that should help Donald Trump in the case of impeachment. The trip was organized on the pretext of filming a documentary series for the conservative cable channel One America News (OAN).

The show is touted as a “Republican alternative” to the U.S. Congressional hearings, where evidence of Trump’s abuse is already called “compelling.”

In addition, experts suggest that Giuliani intends to collect incriminating evidence in Ukraine on Joe Biden, Trump's most likely opponent in the upcoming presidential election.

On the subject: How Ukrainians are trying to transfer materials about corruption schemes Biden in the US

During these conversations, they discussed in particular the investigation into the son of Joe Biden and the possible interference of Ukraine in the American 2016 elections of the year.

During the interview, Telizhenko once again stated that in 2016, during his work at the Ukrainian Embassy in Washington, he was allegedly instructed to help the “democratic operative” collect incriminating evidence against Paul Manafort, an ally of Donald Trump, who is currently serving his sentence in prison.

Chanel Rion, a journalist for the OAN channel on which the documentary series is released, on Thursday released a photo from the filming of an interview with Lutsenko and quoted him about ex-after the United States in Ukraine Marie Yovanovitch: “Ambassador Jovanovic lied under oath to the American people.”

Jovanovic had previously spoken about Trump’s impeachment case. It is known that the US president negatively evaluated her work.

From Budapest, Giuliani went to Kiev and already on Thursday, other Ukrainian politicians began to inform him of a meeting with him.

First, Andrei Derkach, a non-factional deputy, wrote about this on his Facebook page. According to him, they discussed with Trump's lawyer the creation of the parliamentary group Friends of Ukraine STOP Corruption in the Verkhovna Rada.

Derkach also said that during the meeting they talked about "facts of inefficient use of funds" by American taxpayers by Ukrainian officials. "

A joint photo with Giuliani was also posted by the people's deputy “Servants of the people” Alexander Dubinsky.

“He spoke about the plans to create an investigative commission of the parliament, whose main goal will be to investigate the theft of billions of dollars from the Ukrainian budget during the presidency of Poroshenko and Yanukovych, the possible legalization of these funds in foreign jurisdictions, in particular through the Franklin Templeton investment fund, which operates with the United States,” written by Dubinsky.

A little later, the photo with Trump's lawyer on his Twitter page was published by people's deputy Andrei Telizhenko, with whom Giuliani had already seen in Budapest.

“For all supporters of conspiracy theory: it’s no secret what we are doing. The truth will be revealed, ”he wrote. 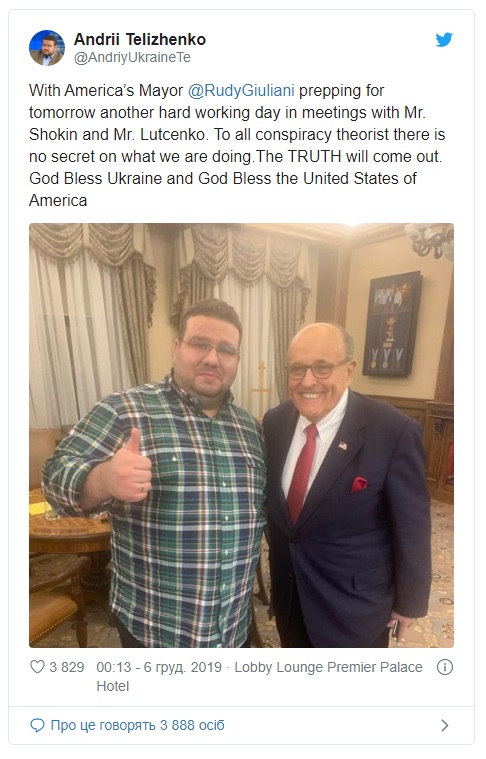 Telizhenko also spoke about the preparations for the meeting of Giuliani with ex-Prosecutors General Yuri Lutsenko and Viktor Shokin.

It was Shokin who headed the GPU when the department was investigating Burisma, whose board of directors included Joe Biden's son.

In the end, Shokin was released, and Joe Biden said that this decision was his merit. Like, it was he who insisted on replacing the head of the GPU.

On the subject: Giuliani: Joe Biden's corruption actions in Ukraine should be investigated

Biden’s opponents use this information as one of the evidence of his corrupt activities in Ukraine.

Giuliani himself did not forget to show activity on Twitter during the Kiev visit.

“The Accounts Chamber in Ukraine discovered the probably improper use of 5,3 billion dollars during the Obama administration, when Biden was a key figure. The Obama Embassy has urged Ukraine not to investigate this case. Stay with us to find out why, ”he wrote the night before.

On Friday morning, Andrei Telizhenko said that Giuliani left Kiev: “Thank you, Rudi Giuliani, for your work and what you are doing for Trump, because we are fighting for the truth! I hope to see you soon in Kiev. ”

The scandal around Biden: the media talked about the meeting of the lawyer trump with a man Zelensky

Ukraine's intervention in the elections in the United States: Trump's lawyer met with the former Ukrainian diplomat