Home loudspeakers How to live in Silicon Valley: a walk through the city

How to live in Silicon Valley: a walk through the city

Blogger, author of service for travelers and guides LOCALIE

Silicon Valley, often mistakenly called “Silicon Valley,” is the center of information technology and the heart of world progress. Here are the headquarters and R&D laboratories of most leading corporations: IBM, Apple, HP, Oracle, Google and many others. Most of the Internet services appeared here: YouTube, Evernote - their offices are also located in the Valley. I propose to take a walk along Mountain View - a small town, the main population of which is employees of those very legendary companies from Silicon Valley. Let's evaluate together, is it good for them there or so-so? 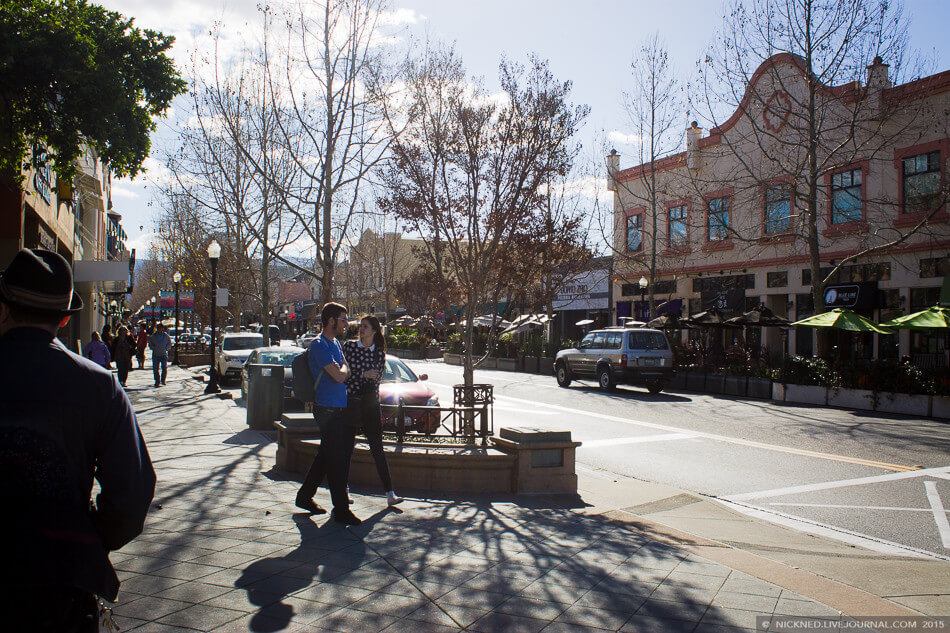 Mountain View is home to almost 75 thousand people - a rather big city by local standards. Although it was founded back in 1902, it began to develop rapidly since the 1950s - it was then that the world's first production of silicon transistors, which became the basis of electronic microcircuits, opened in MV. An interesting fact: it was in Mountain View that a computer store was located, with the owner of which Steve Jobs once agreed to sell the first batch of his computers Apple I. Today, the city has dozens of main offices of high-tech companies, including Google, Mozilla, Symantec, Coursera, Linkedin, Meebo, accommodation Microsoft PowerPoint and MSN Team... Almost all Mountain View residents are employees of these offices. 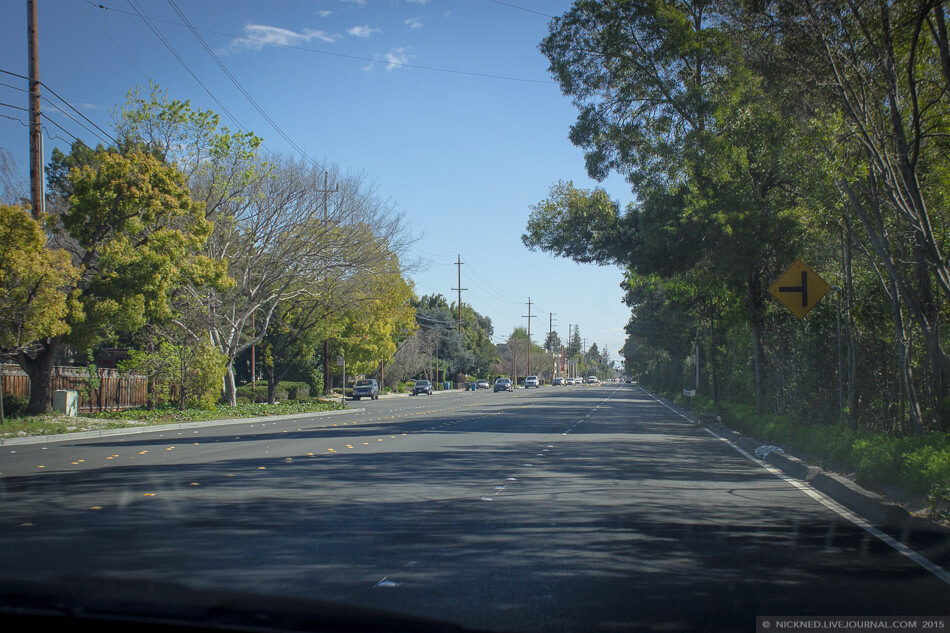 We drove to Mountain View from Palo Alto, where we saw with our own eyes the house of Steve Jobs, where he spent the last twenty years of his life and died in October 2011. California has perfect roads and is a pleasure to drive. And the views are picturesque.

Mountain View is a great pedestrian center. First of all, we found a place, parked the car (by the way, they have free parking! Yoo-hoo!) And went to have a snack. foursquare, which we often use to find the most interesting places and good restaurants, suggested that there is excellent sushi nearby. They are made in a real Japanese restaurant, the owner of which is Japanese, and so are the waitresses. The portions were huge. I have never eaten such large rolls in my life. There were a lot of fillings everywhere - the chefs were generous. It's funny that in the end the cost was not much more expensive than in Moscow "Two sticks", where the quality of the rolls is much lower. The place, by the way, is called “Niji Sushi", address 743 W Dana St. Highly recommend! 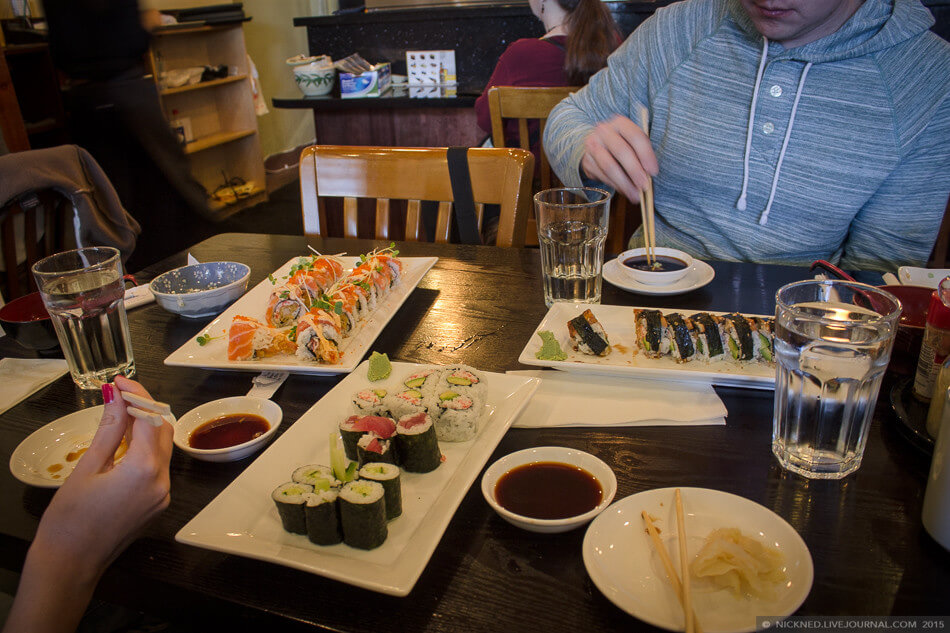 Walking on a full stomach is much more pleasant! The main street in Mountain View is called Castro Street (hopefully not after Fidel?). The sidewalks on it are wide, fenced off from the road by trees, around which there are small stone decorative elements and benches. The houses are low-rise. Almost all the first floors are occupied by good restaurants and shops. By the way, among the passers-by, according to Seryozha, who, one might say, has already become a local resident - very often you can meet famous billionaires, venture capitalists who are looking for promising startups, invest in them, and then “harvest”. Americans do not like to splurge, so the rich often go to the same places as the student interns, moreover, in similar clothes.

The only thing that can betray a wealthy person in Silicon Valley is a luxury car. And even then, recently, the squeak of fashion here is Tesla. And it, based on the local average salaries, is not so unavailable. If you project the cost of a car on the income of the population, it turns out that it is about as difficult for an average Silicon Valley resident to buy a Tesla as it is for an ordinary citizen in Russia to buy a new foreign car such as Focus or Solaris. 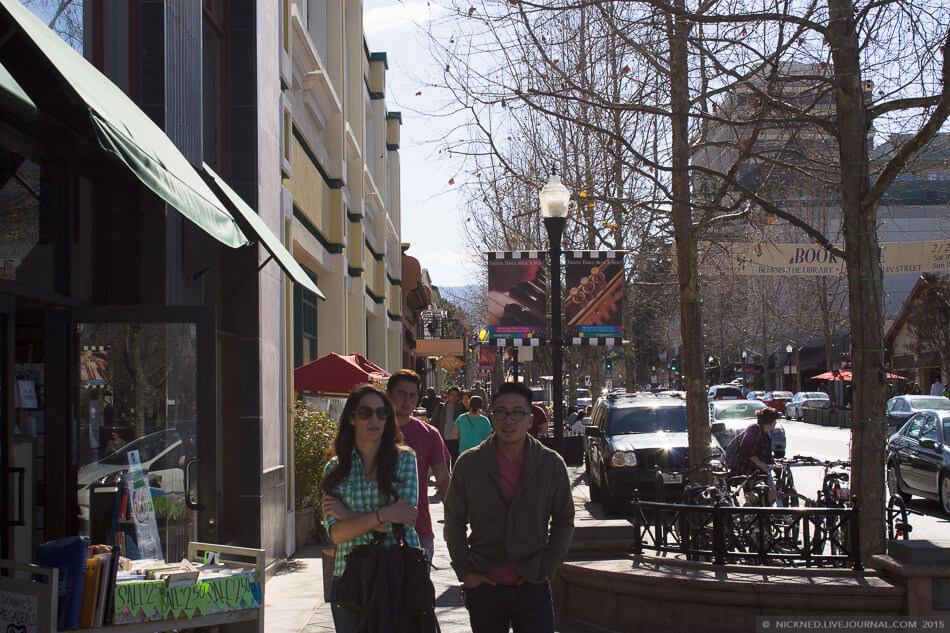 There are a lot of flower beds and flower beds on the streets, which smell and delight with their brightness, in contrast to the bare trees, still hinting: "It is winter, February." 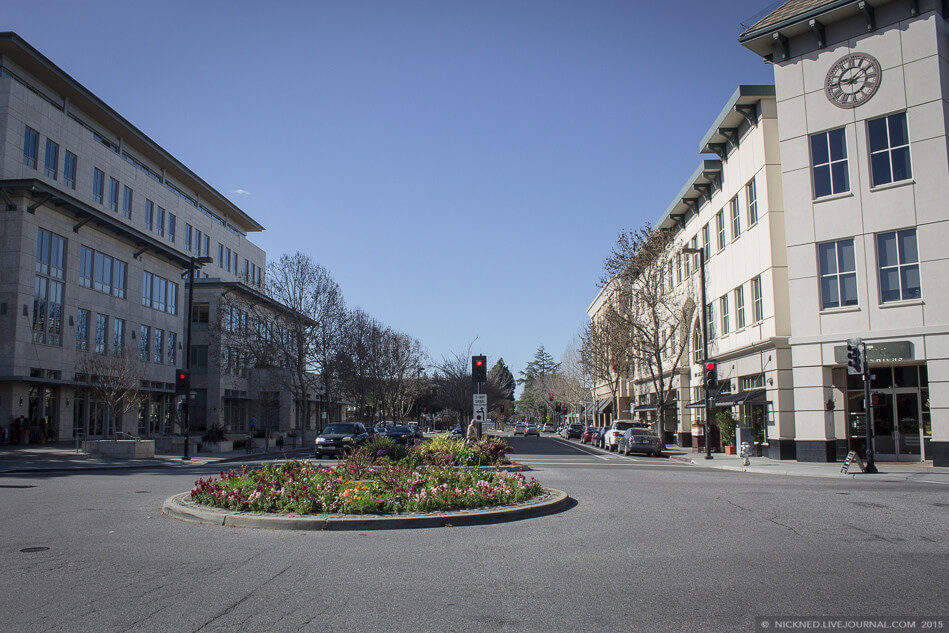 The city administration building is located a little further from the especially crowded streets. There are fewer cafes, restaurants and shops here - such a quiet, pleasant center. It's like in Vladimir two blocks away from the main street. One to one. Every detail in the city beautification is extremely beautiful, verified and well maintained.

At some point, the central street turns into a boulevard with a perfect lawn. 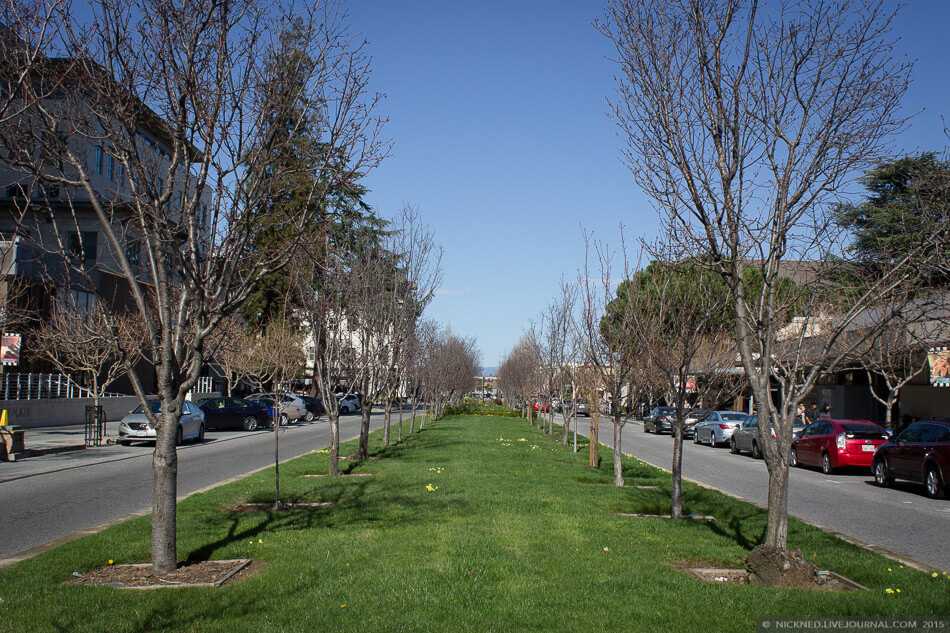 In general, it is so great to live in a place where there are others nearby to your city, in which it is incredibly interesting or at least just beautiful. Where you can go for a change, to have a good time. In the place where I live now, this is not enough, alas.

In the courtyards on lawns resting young people. 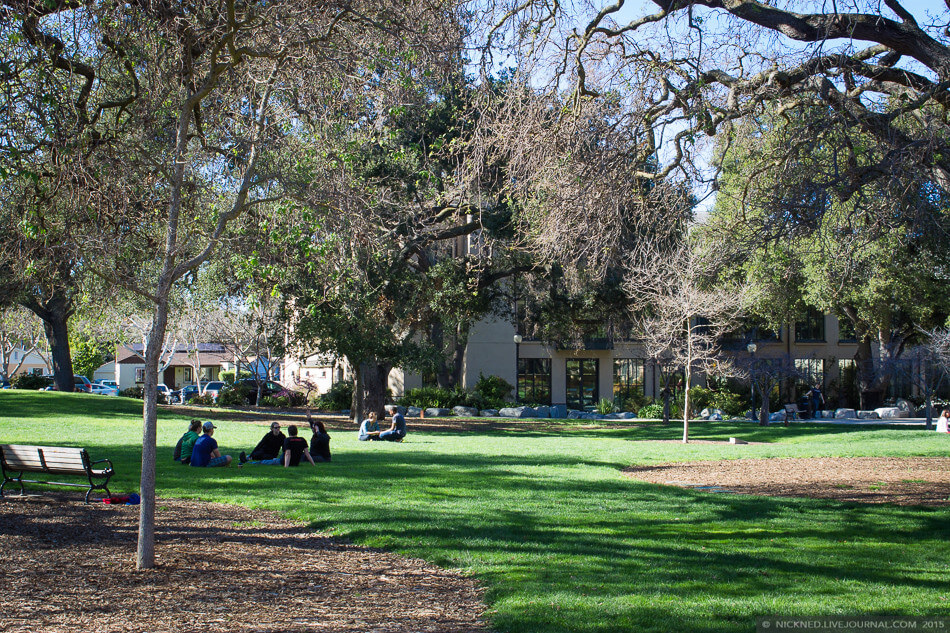 The city is all spick and span. And on the streets you can’t stop feeling its southern location: characteristic landscapes, architecture. Many California residents do not own housing, but rent it. I will not say for sure, so as not to accidentally lie to you - most of them or not. Feels like yes. Buying real estate costs fabulous money, in addition, many current residents of Silicon Valley do not have a clear belief that they want to live here their whole life.

Many American media are trumpeting a serious problem: California is turning into one huge office of an IT company.

Generating thousands of jobs, reaching new heights in IT and innovation, the state attracts more and more people, many of whom simply have nowhere to settle. Herself Bay area very densely populated: good apartments are in demand here, even though the price tag of $ 2500 is monthly for a no frills studio, not including a fridge. Some even save apartment apartments in an hour and a half drive one way from work for the sake of economy. And here it’s not the greed of property owners: there’s no place to build in Silicon Valley. 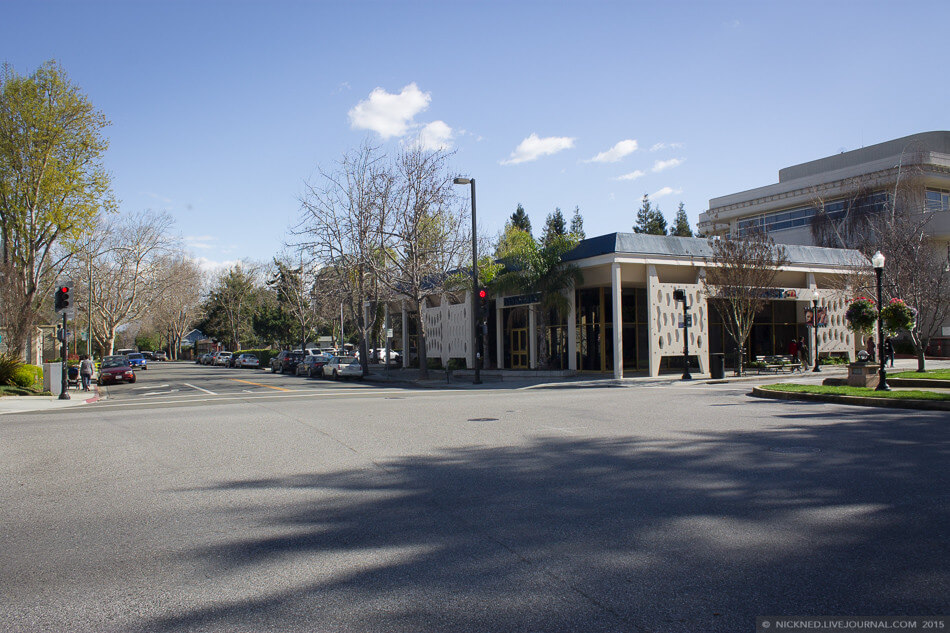 In addition, specialists who come here to a new job often bring with them families, children (or give birth on the spot) who need certain social facilities: hospitals, kindergartens, schools, clubs. All this in Northern California is not enough, according to the American mass media. No, of course, after Russia, even the current state will seem like paradise, but the Americans are sounding the alarm.

However, every cloud has a silver lining. Due to the fact that a very large number of housing in California are rented out, the corresponding market is highly developed here. Firstly, many complexes were initially built not for sale, but for rent. Development companies build hundreds of apartments, and then fight for their client, putting forward the best and most delicious offers. For example, a residential complex Park Place which communicates on the banners that they are pet friendly. “We speak like a dog,” is written on a vertical canvas, if you can translate this very successful American pun. From time to time on the streets there are points for automated rental of bicycles. What the inhabitants of Moscow and St. Petersburg will not surprise. 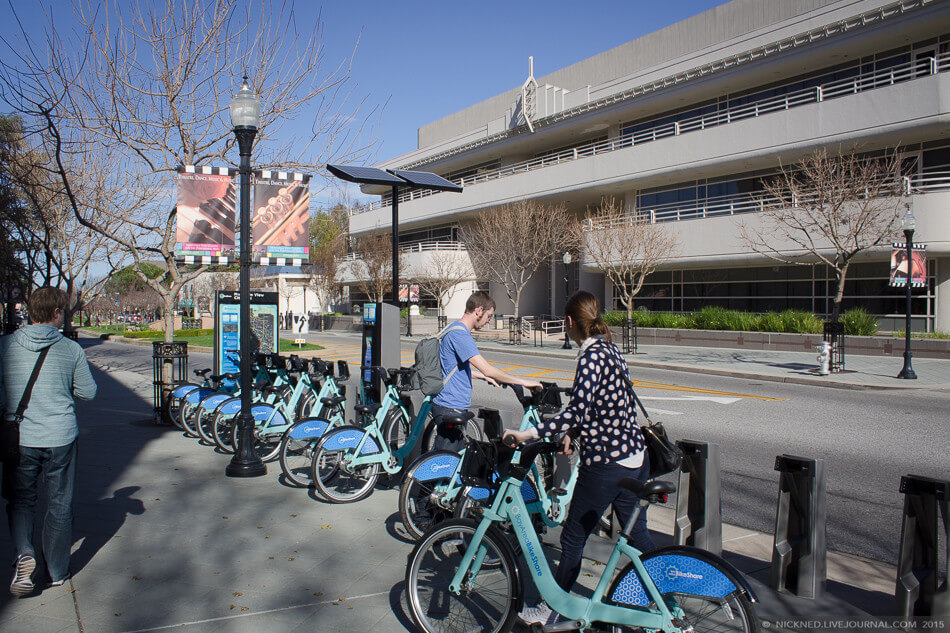 Prototypes of self-governing people often drive around the streets of Mountain View and the surrounding area. Google Car, and a couple of times we saw a mysterious machine, hung with equipment from Apple. In many stores you can pay with iPhone with fingerprint scanner.

We decide to return to the very center again - to look at the railway station, which we liked so much along the way, and in general to move slowly towards the car, since there was little time: we had to get home for dinner and the plane, which took off closer to midnight. Very pleasant, relaxing, but at the same time invigorating place. I felt in the air notes of the atmosphere of a small town in the north of Italy.

Mountain View is a small city, you can reach the desired location in no time. So we got to the station soon enough. Adjacent, such an American-American road. It's funny that some of the trees are green here, others are without leaves. The area is called “Centennial Plaza ”, and the station building itself and the adjacent territory are decorated in antique style - a kind of good old Wild West. 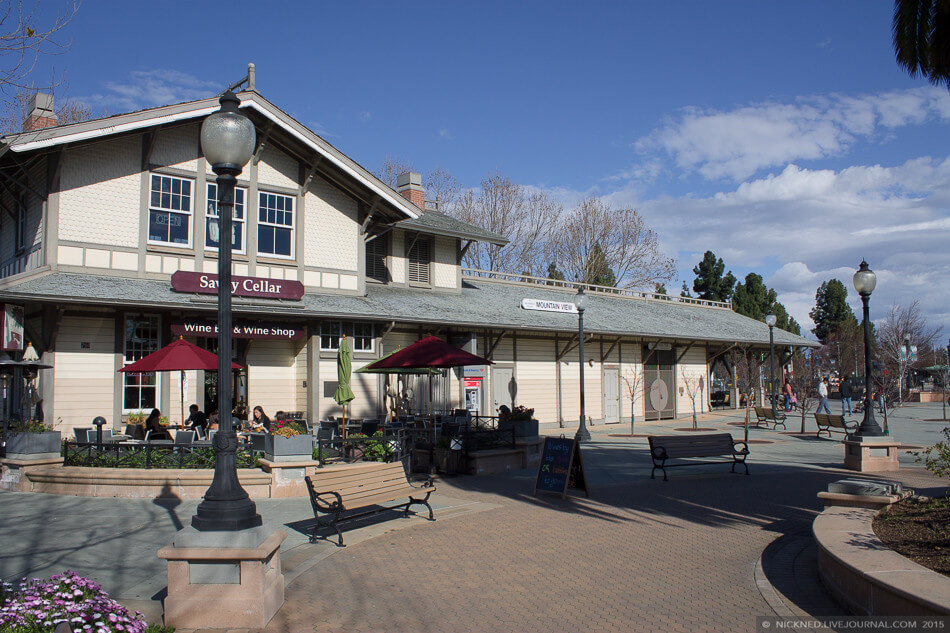 Over the past six months since then, the impressions of niskolechka have not faded. These are the very moments that you remember again and again, hoping to go back in time and live them again.

Personal experience: how to restart in the Silicon Valley business incubator after a failure

Silicon Valley Real Estate: the ruins of a house sold for a million dollars

Ours in Silicon Valley: how to become a millionaire in the US

How to take a break from San Francisco: top 10 seats

Why am I leaving Silicon Valley?