Home loudspeakers The first time I visited a basketball game in the USA: the experience of an immigrant

The first time I visited a basketball game in the USA: the experience of an immigrant

“The NBA in action is simply fantastic!” - a replica of one often shown television ad was recalled from my childhood. Then the abbreviation "NBA" for me really was something from the realm of fantasy. We exchanged chewing gum inserts with the image of famous players of this most famous basketball association and watched its matches on TV "Electron - 716". Then, as a child, sitting in front of the TV, I did not even think that I would ever touch the arm of the basketball star of this same NBA ... 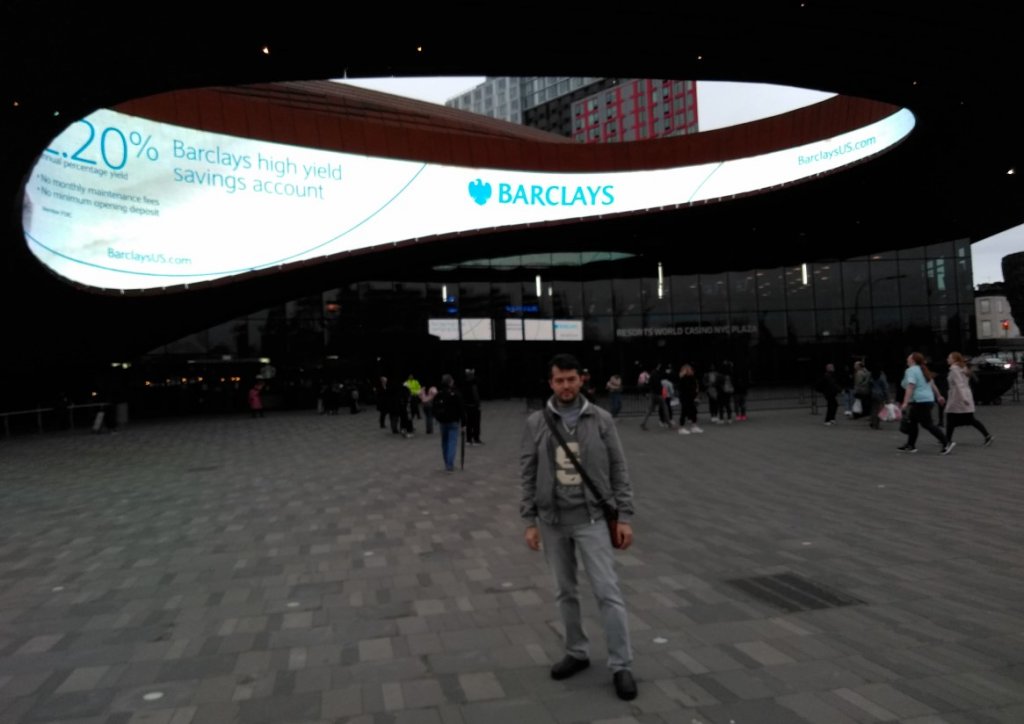 Those were the May holidays, the final chord of which for me was always the celebration of Victory Day. For the first time on this day, May 9, I was in the United States, and, apparently, I was destined to celebrate Victory twice - the first Soviet soldiers in the Great Patriotic War, and the second - in the basketball game of the American team with the Chinese ... “Kill” two birds with one stone - I looked at the Barclays Center, which I often drove past, and then decided to go for the first time in my life to basketball with my classmate Alex. At the last moment I found out that women play.

“Well then,” I thought, “it’s even more interesting, more aesthetic ...”

We arrived ahead of time and were pleasantly surprised that at the entrance we were presented with a T-shirt with the logos of two teams: New York Liberty and Chinese Womens national team. However, having turned around, I saw that the size of the T-shirt is designed for the figure of a basketball player. He returned, asked to change to a smaller size, however, it turned out that all sizes are the same. Probably only tall spectators with shoulders around like Schwarzenegger go to basketball games ... 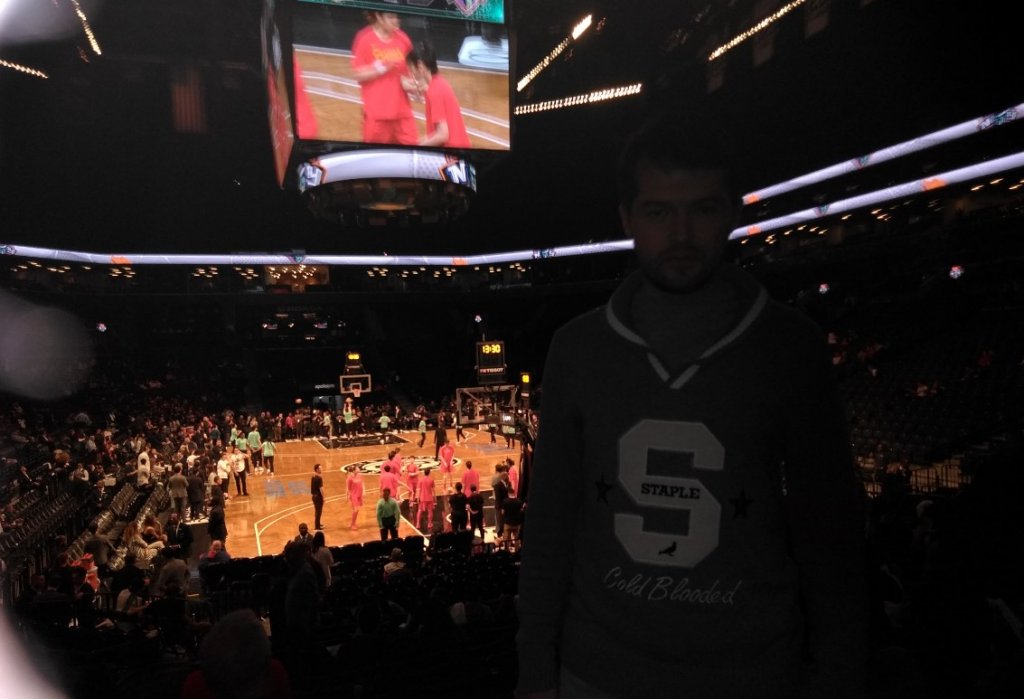 We had General Admission seats and we agreed that Alex would take the best seats available, and at that time I would study the interior of the famous Brooklyn center. When I was walking in the center, I was approached by a Frenchwoman who immigrated to New York, who worked as a promoter at similar sports events. She offered me a glass of rum in return for filling out a questionnaire.

On the subject: Personal experience of a Russian-speaking immigrant: how we set a new Guinness record in New York

Finishing off the remnants of free rum, I finally found our places, 5 minutes after the start of the game. 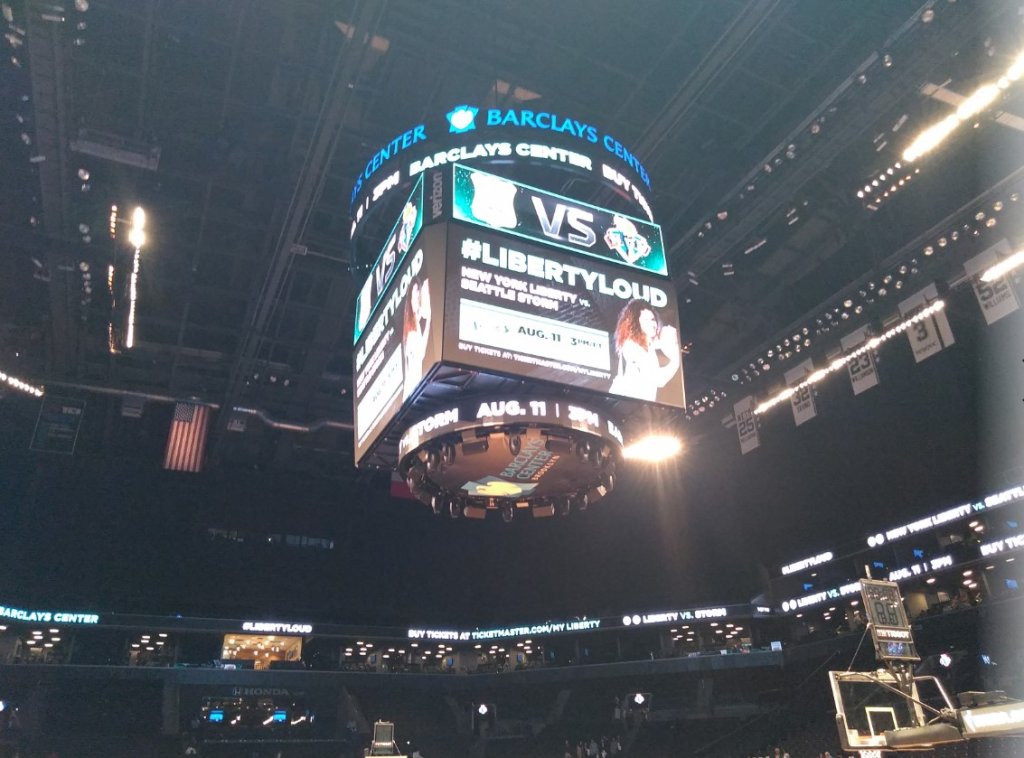 I tell you, watching NBA games live and on TV are two big differences. Live in the stadium - it's a stunning sight, with effects, cheerleading with Americans and Chinese women and various dances during breaks performed by dancers of different ages and nationalities ...

- Who do you think will win? I asked Alex during the first half.

“I think the Chinese will win, and you?” He answered me.

- I don’t understand much in basketball, but I know the situation in the international football arena. There, all eastern nationalities are outsiders. They are weak and quickly expire. I think the Chinese women will lose.

- Well, what are you! Look how tall Chinese women are! - Alex continued, - and our players are all stunted, with the exception of one girl. In addition, it seems that this only tall girl in our team is also a Chinese woman. So, there is a chance that she will succumb to the Chinese team. Americans will lose! 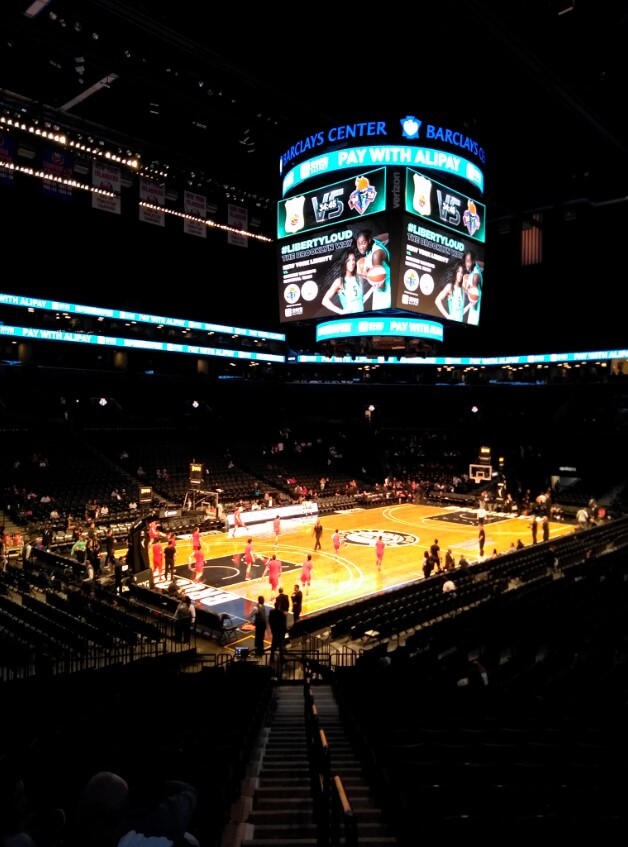 Yes, that only tall girl in our team, ironically, looked very much like a Chinese woman and she was unrealistically tall ... Therefore, the outcome of the match in favor of the Chinese was quite logical.

I thought that I drank a glass of rum “on the ball” while Alex guarded my place, and in order to restore justice, so to speak, when in the second half the Chinese women pulled ahead with a score of 42:36, I suggested that he argue. If the team from China wins, I treat him with a glass of rum; if the team in New York wins, he treats me. We argued. 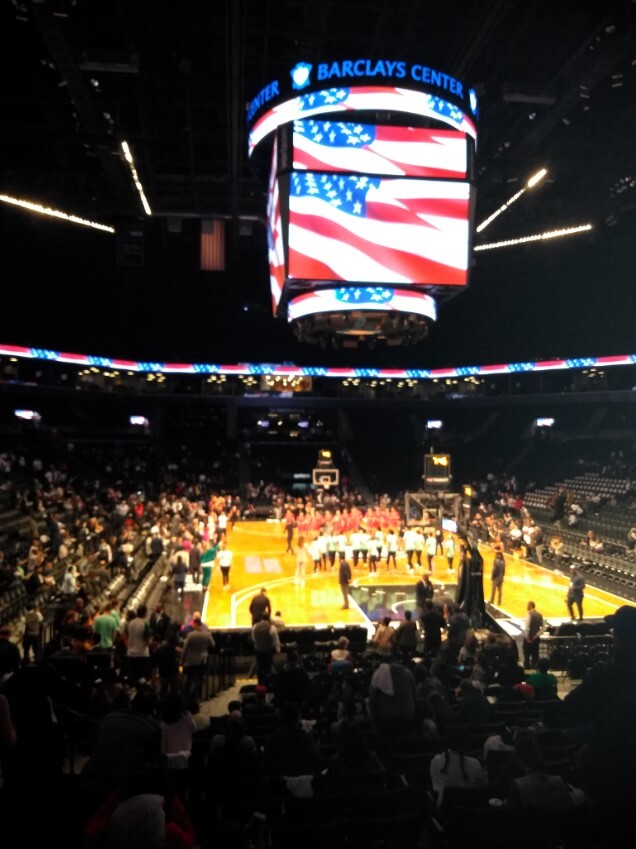 Either the native walls helped, or the prevailing chant of the audience in favor of the Americans, but the course of the game was gradually changing in our favor, and by the beginning of the last half, the New York team was already ahead of the Chinese team. Alex, referring to his circumstances, left the match, without waiting for its end. Of course, I sat until the end, stating the final score 89:71 in favor of New Yorkers.

On the subject: Personal experience: what I did in Russia and stopped doing in the USA

I was already starting to make my way to the exit, when I saw a crowd of people along the perimeter of the corridor through which the players and the attendants of this match went out. 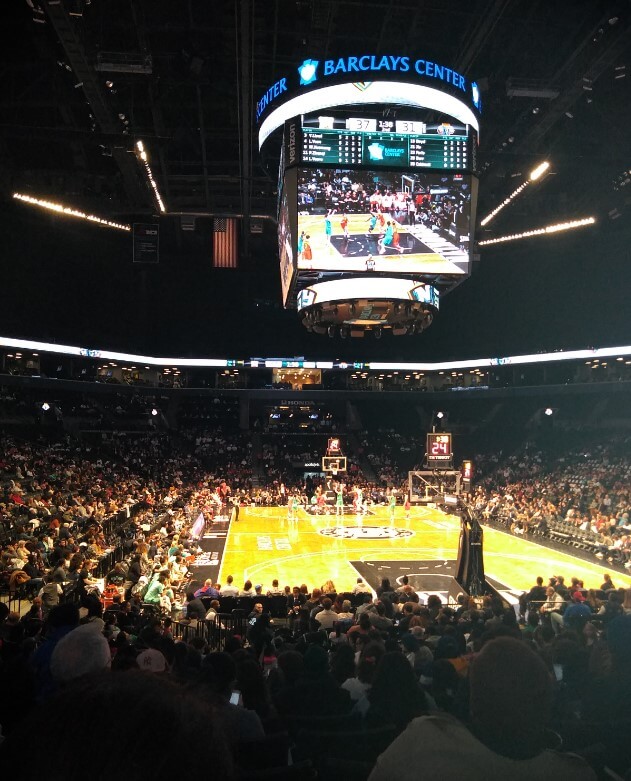 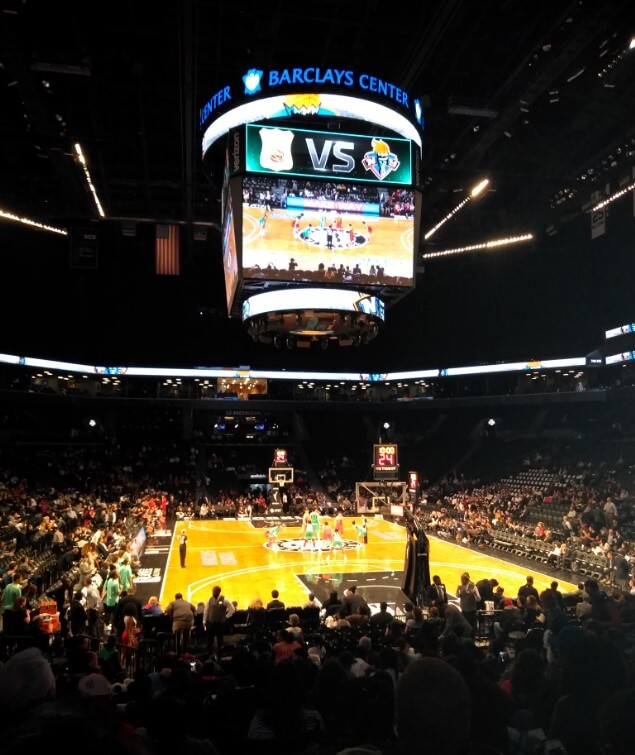 I made my way there and realized that the audience was pulling their hands into the aisle, thereby provoking the leaving players to clap their hands. Of course, I decided to join this action. I chose a row where there were least of all those who wanted it, or rather, one person, and rushed to the end of this row. However, this one man turned out to be a major American. And I couldn’t manage to squeeze so that my arm protruded in the aisle so that it could not be overlooked by the basketball players leaving the playing area.

Photo by Oleg B.

Suddenly, I saw the same Chinese woman approaching the aisle - the captain of our team, who threw so many goals into the basket that allowed her team to win a victory, and I had a second glass of rum ... Oh, no, I could not miss such a chance! Then, remembering the elements of jujitsu, holding in my palm a smartphone with the video function turned on, I put my other hand in such a way that my hand and the Chinese woman’s hand touched ...

Photo by Oleg B. 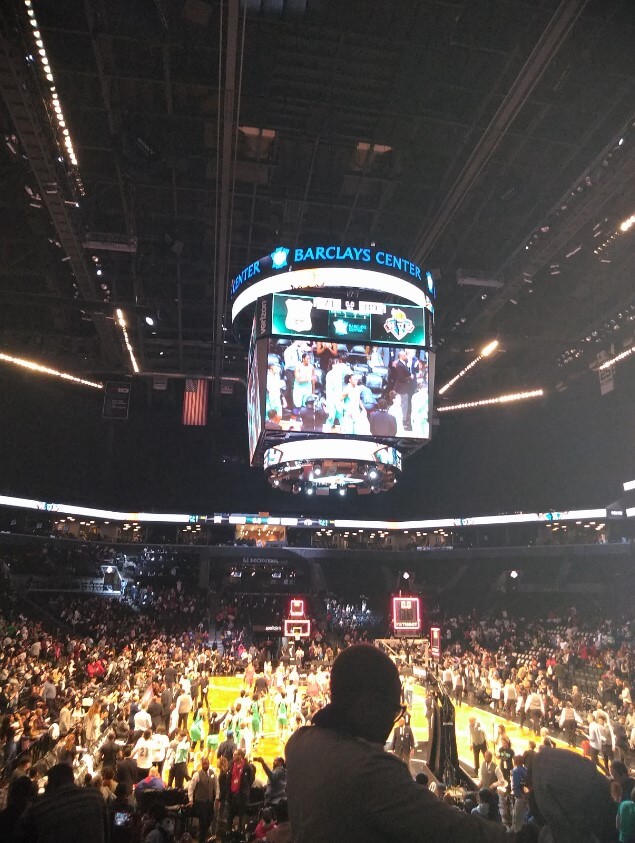 It was my lucky day when the women's team in New York won. And I won three times - the first time, getting a glass of rum for free, the second time - winning it in a dispute, and the third time - getting the cotton of the basketball star of the most prestigious basketball association ...

Absolute record for sneakers: Nike 1972 of the year went under the hammer for a record amount

A true American dream. How 13 siblings built a business on $ 300 million on dad's recipe