For 90 years, archaeologists have been trying to establish whose skeleton was found in Prague Castle. These human remains dated to the 10th century were discovered by the Ukrainian archaeologist Ivan Borkovsky in 1928. These remains did not give rest to both the Nazis and the Communists - both of them tried to interpret them in their ideological paradigm. 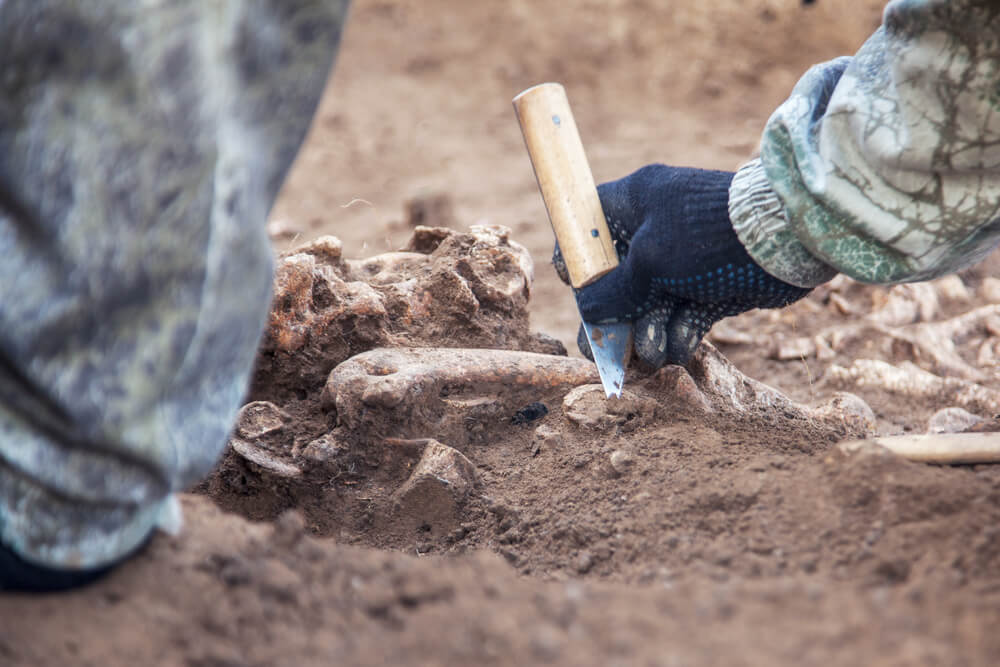 And attempts to uniquely establish the ethnicity of the thousand-year-old remains probably speak more about us than about the former owner of the skeleton, notes Air force.

He lies, his head turned to the left, and his right hand rests on the hilt of an iron sword. Two daggers lie near the left - as if he was about to reach them with his fingertips.

At the elbow there is an object that could be a razor or a flint - a medieval lighter, which testified to the high status of the owner.

At the feet are the remains of a wooden bucket (it is similar to those used by the Vikings for ceremonial drinking) and an iron ax.

But most of all the military sword attracts the eye. Almost a meter long, he still has not lost his greatness and beauty, although he lay underground for a thousand years.

Is it a viking?

“The sword is very high quality, probably made in Western Europe,” says Jan Frolik, a professor of archeology from the Czech Academy of Sciences.

Such swords were among the Vikings of Northern Europe, in the territory of modern Germany and England, as well as in Central Europe. However, they were used not only by them.

“Consequently, his weapons and tools are predominantly those of the Vikings, or at least very similar. And his nationality is still in question, ”adds Mr. Frolik.

This question has intrigued and confused historians since the 1928 year, when the Ukrainian archaeologist Ivan Borkovsky unearthed these remains in the Prague Castle.

Borkovsky, who emigrated to the Czech Republic as a result of revolutionary events in the Russian Empire, led the excavation. However, he was only an assistant director of the archaeological department at the Czech National Museum, and he was not allowed to publish his own conclusions.

On the subject: From mind control to murder: how the CIA tested drugs and poisons on Americans

From Nazis to Communists

When the Nazis captured Prague in 1939, they quickly supported the “Viking” version, because it fit well with their narrative about racial purity.

In the end, the Vikings were Scandinavians, that is, Germans. This combination of circumstances turned out to be very useful for the Occupant propaganda, because it supposedly confirmed the Hitler idea that the German race was only returning to itself the lands that from time immemorial belonged to it by right.

Under the threat of deportation to a concentration camp, Borkovsky was forced to work for Nazi science. Significant changes were made to its scientific potential - and published in support of the Germans' historical claims.

Immediately after the war ended, Prague came under no less violent influence from the Soviet Union. Borkovsky was again forced to change direction - abandon the idea of ​​a Viking.

He quickly brushed off the dust from the theory of his former boss: as if the skeleton actually belonged to the noble representative of the ancient Slavic dynasty Przemyslovich, who ruled Bohemia for more than four centuries, until the 1306 year.

The scientist managed to ward off a new threat, this time - the Gulag camps.

On the subject: In Ohio, an 12-year-old boy found the tooth of an animal that lived 4 thousands of years ago

Who is this man?

Modern archaeologists, including Jan Frolik, have the freedom to be guided by objective science, not ideology.

“We know for sure that he was not born in Bohemia,” says Frolik and explains that analysis of the radioactive isotopes of strontium from the teeth of a warrior proves that he grew up in northern Europe, most likely on the southern coast of the Baltic Sea or in Denmark.

But it is from there that the Vikings come from, isn't it?

“Yes, but just because he was born in the Baltic region does not automatically mean that he was a Viking. In those days, the southern coast of the Baltic was home to Slavic tribes, and the Baltic, and others.

He believes that a warrior from the north (who died for an unknown reason at about 50 years old) came to Prague at a young age and entered the service in the retinue - either to Borievo I, the first prince of Bohemia and the ancestor of the Przemyslovich dynasty, or to his eldest son and heir Spitignev I.

Przemylovych founded Prague Castle as the capital of a young Bohemian state. The fact that the warrior is buried right in the center of the city suggests that he was an outstanding person.

Looking at the skeleton of an unknown warrior in a glass case that is now standing in the cool basement corridor of the old Royal Palace, it’s hard not to think about the same question, the answer to which we will never know. Who was this man - a Baltic born, the owner of a Viking sword, a noble servant of the Bohemian princes?

“It is known that modern people can identify themselves differently depending on the situation. It was the same in the past, ”says Professor Nicholas Saunders, a specialist in 20th-century military history, archeology and anthropology from the University of Bristol.

Professor Saunders recently published an article about this skeleton in Antiquity magazine, co-authored with Dr. Frolik and Professor Volker Heidi, an archaeologist at the University of Helsinki who is currently working on DNA analysis, which may partially clarify the ethnicity of the warrior. Partially, but not completely.

“The motley collection of things owned by this person may symbolize his multifaceted personality. It is unlikely that we can definitely say whether he is a Viking or a Slav, ”says Professor Saunders.

“People themselves write their biography, adapting to where they are in space and time. And this man, obviously, has gotten used to playing one of the main roles in his environment for years - if not the most important one. ”

In other words, his things reflect his life.

'Sadist', 'executioner', 'Nazi criminal': a series about a Ukrainian who served in death camps appeared on Netflix

In Ohio, an 12-year-old boy found the tooth of an animal that lived 4 thousands of years ago

A farm of corpses in South Florida: why is it needed?