Historian Tamara Eidelman in her book How Propaganda Works, which is published by Individually, describes how the mechanism for spreading deliberately false information works, and also details several well-known examples. One of them is the myth of the Colorado potato beetle as a biological weapon created by the Americans. 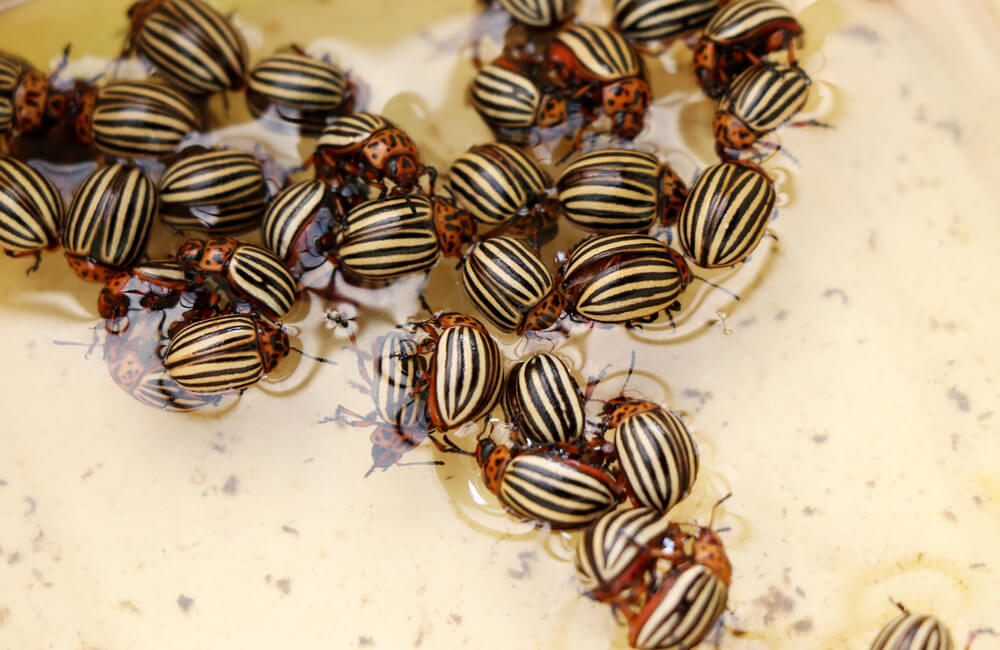 With the permission of the publisherMedusa»We publish an excerpt from a book devoted to the Colorado potato beetle - and how the Americans allegedly spread it in Eastern Europe.

... But the worst pests are, of course, external enemies. And if the pre-revolutionary Russia was mostly an “Englishman shit,” then in the late Soviet propaganda, the championship was, of course, America.

The massive influx of the Colorado potato beetle

The Americans in the view of Soviet propaganda and the Soviet people crammed horrible things. One of the most sophisticated of their inventions was the distribution of the Colorado potato beetle. This striped yellow-black pest was discovered at the beginning of the 19th century in the Rocky Mountains of America. But then no one could have imagined what kind of future he was facing.

The Colorado potato beetle is a very unpleasant pest who, after descending from the Rocky Mountains, suddenly discovered potato fields and since then has been feeding mainly on this product. Today it is distributed in the United States in almost all states except Alaska, California, Hawaii and Nevada, and in Asia and Europe it is found on an area of ​​more than 16 million square kilometers. Back in 1871, one American entomologist warned Europeans about the danger of the Colorado potato beetle, and in 1875, France, Germany, Belgium and Switzerland banned the import of American potatoes, fearing a pest.

He may have fallen into Europe before, but in the 19th century they ate little potatoes - it was considered food of the “poor and convicts”. But when the potatoes began to turn into one of the most favorite dishes around the world, the Colorado potato beetle began to meet more and more. It is difficult to fight him - in Great Britain alone he was “destroyed” 163 times, and he came back again.

The appearance of beetles on European territory was also facilitated by wars — as soon as American troops appeared, they found beetles near their military bases. It can be assumed that the soldiers were fed potatoes brought from America, and the beetles from the warehouses were chosen “at will”. After the Second World War, they easily mastered the ravaged Europe, in particular in those places where there were already Soviet troops. And then it began.

“Report of the Minister of Agriculture of the USSR I. A. Benediktov to the Secretary of the Central Committee of the CPSU (b) M. A. Suslov on the danger of the spread of the Colorado potato beetle

At the same time, the American, British and French occupying authorities almost did not carry out any extermination measures against the Colorado potato beetle, thus creating extremely favorable conditions for the mass reproduction and spread of the beetle and the constant contamination of the areas of the German Democratic Republic adjacent to the western zones of occupation of Germany. From these border areas, the beetle constantly flies into many other areas of the German Democratic Republic, nullifying the results of the extremely intense and costly work on the extermination of the beetle, carried out by the population in the republic. ”

* * *
I wonder why the Soviet military administration fought the beetle, and the American, British and French occupation authorities overlooked this danger, especially since the Americans really should have known about the Colorado beetle.

The answer is given further:

“Creating favorable conditions for the mass reproduction of the Colorado potato beetle, the Americans simultaneously carry out atrocious acts of dropping the beetle in mass quantities from planes over several areas of the German Democratic Republic and in the Baltic Sea region in order to infect the beetle and the Polish Republic. The Ministry of Agriculture of the USSR daily receives information about the massive influx of the Colorado potato beetle from the Baltic Sea to the shores of the Polish Republic. This is undoubtedly the result of Anglo-American sabotage work. ”

So, it turns out, the Americans dump beetles from airplanes and specifically infect those states in which Soviet power was established. I would like, of course, to know how many American planes could afford in the 1950 year to fly over the territory of the GDR and Poland. And besides, obviously, very low, like the fly "maize" pollinating the field.

Even more interesting, how far can the Colorado beetles swim, if we are already talking about a “mass influx”? Are they amphibians? And finally, if the beetles get into the territory of the GDR, who will prevent them from then moving to the Federal Republic of Germany, to the territory controlled by the Americans, and from there to all the NATO countries?

Probably, these thoughts came to someone already then, but it was unlikely that they were decided to speak out loud. And the stories about the terrible Colorado beetles, which the Americans throw up to us, constantly multiplied. In the same note, the Minister of Agriculture proposed remarkable measures to combat the beetle. There was not a word about the possible methods of its destruction, about those chemicals that need to be applied.

No, the fight against the Colorado potato beetle turned out to be exclusively ideological:

It is enough to look at these measures, which the Minister of Agriculture suggests, I remind you, to understand that it is not an agricultural, but an ideological campaign.

Colorado beetles, of course, were. They certainly did a lot of damage to the fields. They certainly came to Europe from America. And these facts turned out to be enough to develop absolutely fantastic propaganda, showing beetles as a real detachment of American saboteurs. In German, Polish, Soviet caricatures, beetles march with guns, get assignments in the White House personally from US President Truman and from Western European politicians, and even find themselves on the American flag instead of stars.

They were credited with the same destructive force as the atomic bomb:

“American candidates for atomic war criminals today showed a sample of what they are preparing for humanity. Only murderers can resort to such horror as the deliberate destruction of peaceful human labor, the destruction of the crop by the Colorado potato beetle. ”

Endless articles and cartoons tightly linked fantastic harm from the Colorado potato beetle to the United States. They have already forgotten about the beetle, but a bunch of “USA - danger” has fixed well.

"As if she were in the USSR": Ukrainian woman spoke about her life in the USA

Israeli historian told what it is worth preparing for humanity

Memo to the Americans before traveling to Russia