Home Our people Personal experience. How we arrived in the United States on a student visa 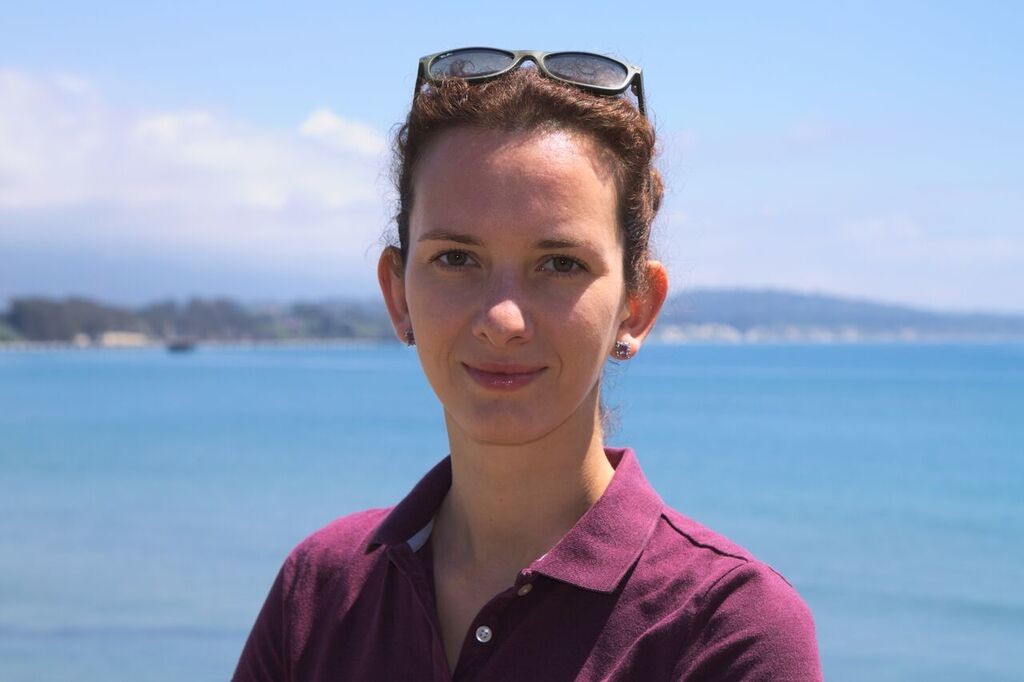 Probably every immigrant remembers the date when he flew to a new country. I am no exception, although I do not consider myself an immigrant, but rather a temporary resident. My husband enrolled in the Department of Computer Science doctoral program at an American university and went to study. The term of study is 5-7 years. I flew in after him about six months later, because I had to finish the project at my last job.

So, February 1 2012, I got off the plane in Santa Barbara, California. I want to warn you right away that I have already heard all the possible jokes about the city and the eponymous series popular in 1990. It is difficult to count how many times I sang a melody from the credits when I told my friends that I was going to live in Santa Barbara. 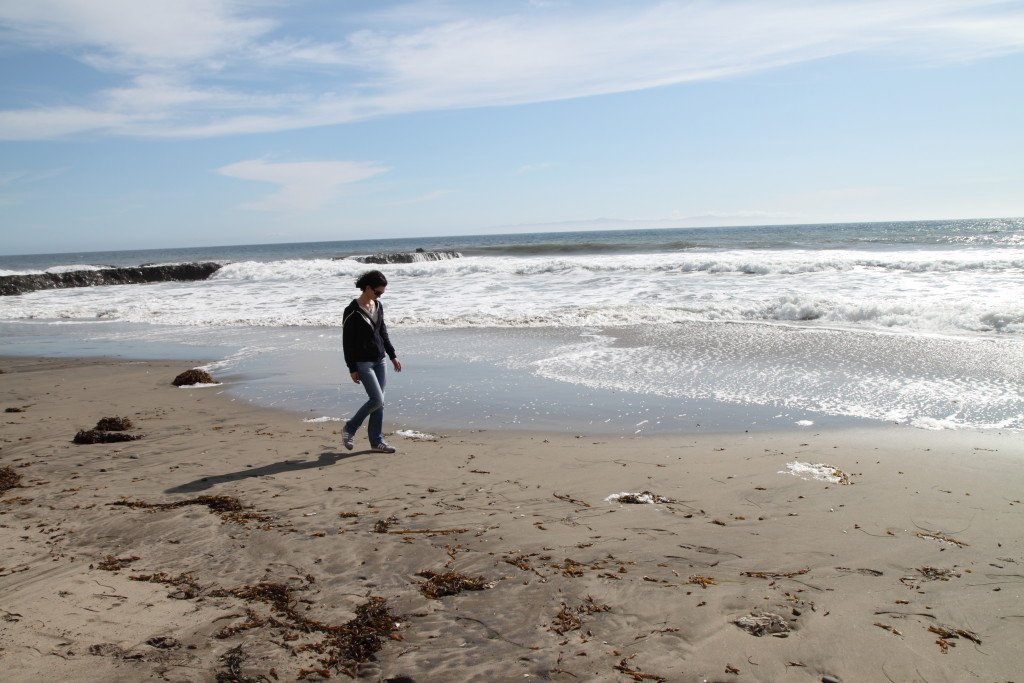 Walking along the ocean has become commonplace. Photos from the personal archive

Actually, moving to the US looks simple and easy on my part only, since all the work was done by the husband, who is now entering the home straight to get the title of doctor of science.

To write a dissertation at an American university, you need to “enroll”, that is, to pass the exams and interest the admissions office with its research. A prospective graduate student must pass a language proficiency test (TOEFL / IELTC), the GRE general education test. Along with these results, an essay is sent to the selection committee, explaining why and why a person goes to this field of science, three letters of recommendation, a diploma transcript, an average university grade time (GPA), a resume and a list of scientific works.

Husband sent documents to approximately 15 universities. Less than half answered and invited to an interview on Skype. As a result, three universities called him into their doctoral programs and promised to finance the training. Then we on the family council chose where to go.

Since the main thing in students, in addition to drive and thirst for knowledge, is lack of money, then, first of all, we looked at what scholarships were offered. The choice is relatively easy: very little, little, and little more than little. We took into account the standard of living in cities, the cost of rent, criminality (usually, university campuses do not suffer from this), distance from megacities, air links with the homeland and climate. The latter was my fix idea.

From the movies and books about California, it seemed to me such a climate paradise after gray Moscow. Everyone should wear shorts, t-shirts and slippers all year round. Hardened people do that. Needless to say, having arrived in February, I recalled in the evenings about my down jacket. Still, the cold wind from the ocean, even at + 10-15 degrees, makes me feel cold. But in the end, the choice was made, the proposal from the University of California was accepted. We were given student visas such as J1 / J2, which allowed me to get a work permit.

Foreign students on a par with local provides a hostel, including family. It has to wait for a long time, because compared to the prices for apartments in the city, the cost of the same apartments on campus is much lower, and there are many people who want it. But there are limitations on campus: for example, students can only live here for five years, change an apartment to a larger area or a convenient location only once. Husband stood in line at the apartment as soon as he arrived. So a couple of days after my arrival, we already drove into their homes. Up to this point, he, like many, rented a room in the private sector. 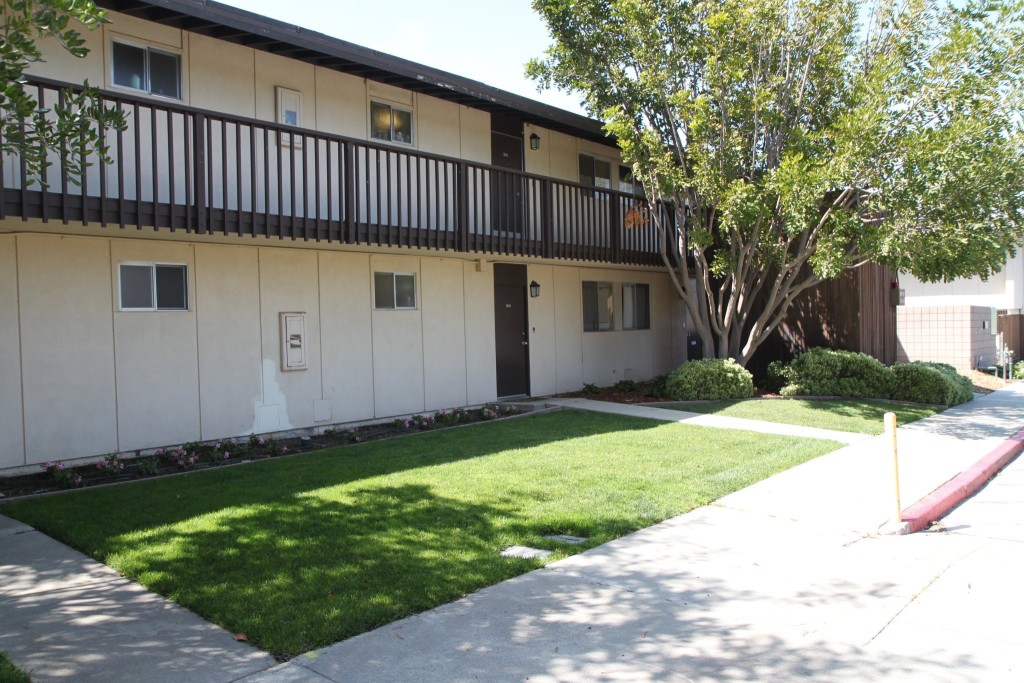 The next stage for me was immersion in the university atmosphere - such a free floating in an intellectual English-speaking environment with my, as it seemed to me then, weak English. There are few Russian-speaking students and professors in our university, and there is no established helping diaspora. Unlike, for example, Indian, Chinese or Taiwanese student organizations that actively help their compatriots adapt to a new lifestyle.

But the university itself organized courses of spoken English for "family members of foreign students and teachers." Classes are held four days a week, usually two lessons a day, each one and a half to two hours. The teachers here are volunteers who lead discussions in a free manner, setting a topic for conversation. Basically, they try to talk about the culture and traditions of the United States, learn about life in other countries. 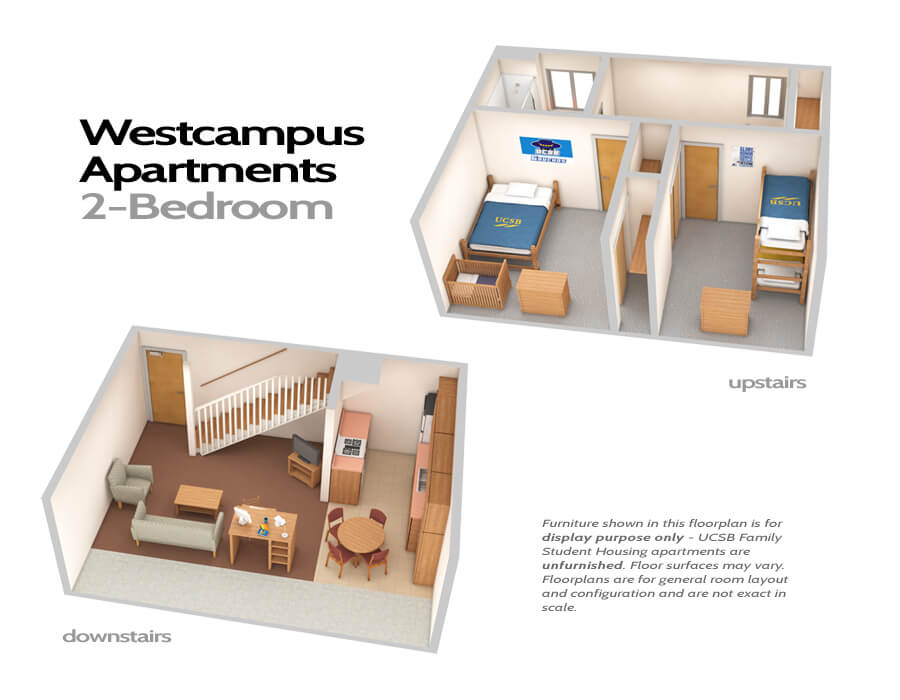 Typical layout of a two-floor apartment in a hostel. Photo: www.housing.ucsb.edu

Holidays are sure to be celebrated (Halloween, Thanksgiving, Christmas, Easter, the end of the school year), often there are parties or a barbecue at the teachers' house. In particular, one of our teachers has always tried to organize something during the holidays, when all Americans go home and foreigners feel lonely in the empty campus. It seems to me that these are ideal conditions for talking and making friends. In any case, it helped me in due time, and I still communicate with people who have already graduated from the university and left. 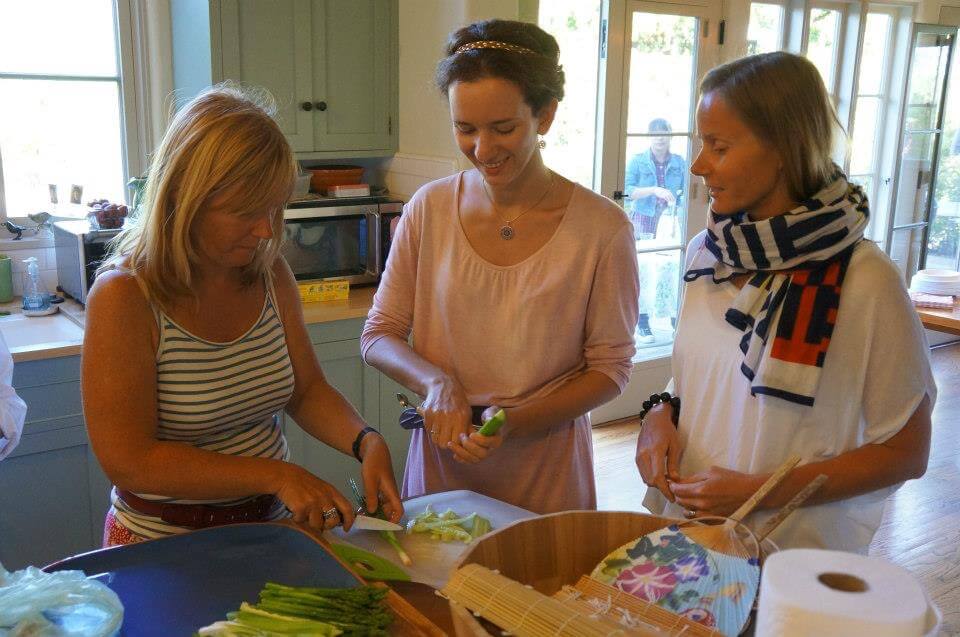 One of the parties at the English teacher. This time we are preparing sushi in an international company. Photos from the personal archive

In addition, you should not give up in front of purely American gatherings, even if your English is far from perfect. Every native speaker has a sense of pride when a foreigner tries to speak his language. For example, I loved going to dance classes and film screenings followed by discussion. And entertainment, and practice of language, and physical activity, and new acquaintances. The cost of such events is always minimal, since it is designed for students (not only foreign students try to tighten their belts). 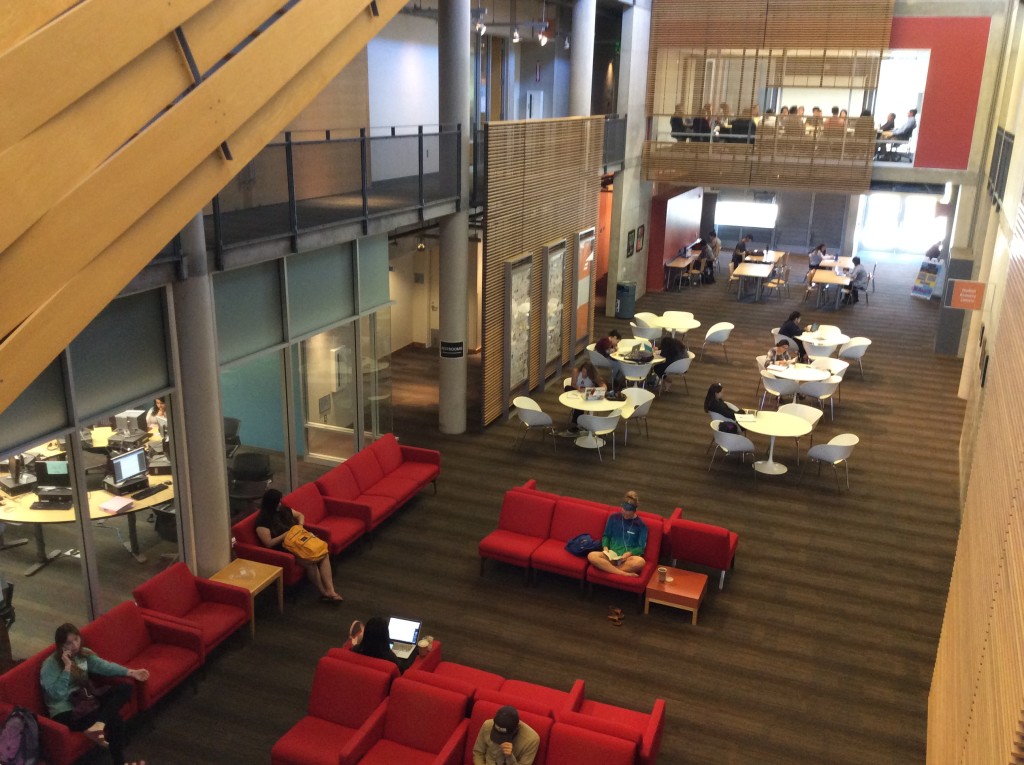 On the territory of the university there are many open spaces where students can work. Photos from the personal archive

In general, our social circle is very international, there are very few Russian-speaking acquaintances. But we plunge not only into American culture, but also into Chinese, Korean, Spanish, Belgian, Chilean, Japanese and many others. The university leadership and the student housing office try to accommodate the diversity of cultures. For example, on campus, the Chinese New Year, Cinco de Maya (Mexican holiday in May), and the Holi festival of colors are celebrated.

In student dormitories of universities there is a position of assistant tenants. They are responsible for observing the rules of life in the dormitories, settling conflicts or issues, assist in the settlement, organize activities for residents. In addition, they are trying to attract to this and the tenants themselves. For example, trying to acquaint students with Russian culture, I did an adapted Maslenitsa for neighbors. For the purchase of everything necessary for a holiday or party, the hostel management allocates money. Also, the tenants' assistants provide all the information about the assistance programs (food stamps, food distribution, medical insurance, psychological support).

I think we got into very comfortable conditions when moving. And the entrance to the new life turned out to be very smooth and soft, unlike the situations when people come to an empty place without connections and acquaintances.

As soon my husband will have to complete his thesis, our status will change. It will depend on where the spouse will continue to work. If it decides to go to the IT industry, it will issue a work visa. If it remains in the scientific field, it may be looking for work in universities, even in other countries. In the meantime, I enjoy our life on the beach, albeit a cold, but such Pacific.

From the first person: how Muscovite settles in Los Angeles

The most expensive state universities in the US

study in the USA