An American couple spending their honeymoon on a New Zealand cruise suffered serious burns as a result of a volcanic eruption on an island filled with tourists. The catastrophe occurred on Monday, December 9. Six dead are known and this number continues to grow. 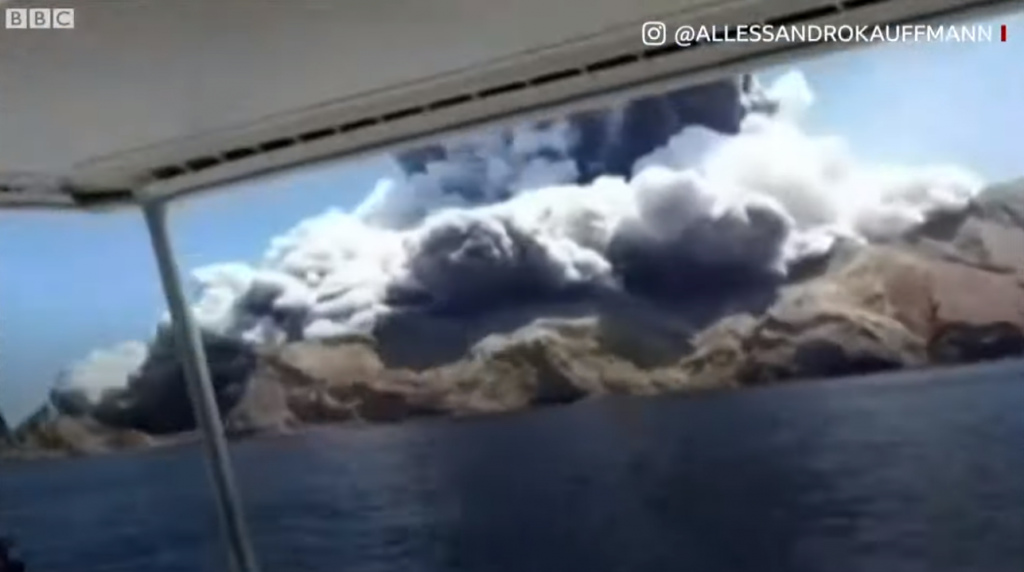 New Zealand police said the man who was treated at Middlemore Hospital after the eruption on White Island died, resulting in official deaths of up to six, writes Fox News.

The White Island is located about 30 miles (about 50 km) from the coast of mainland New Zealand, and, according to experts, it is the most active cone volcano in the country, about 70% of which is under water.

Police said there were 47 people on the island at the time of the eruption, including 24 people from Australia, 9 from the USA, 2 from China, 4 from Germany, 5 from New Zealand, 2 from the UK and 1 from Malaysia. Many were passengers aboard the Royal Caribbean Ovation of the Seas cruise ship.

8 people are missing, and the bodies of the dead are transported to Auckland.

Five people are dead and at least 10 are missing after the White Island volcano eruption. 😢pic.twitter.com/4X8ebcFHdc

White Island volcano eruption. This is video we were taking as our boat tried to get us a safe distance before going back for survivors. It didn't dawn on us right away what had just happened or that there were still people were still on the island. #whiteislanderuption pic.twitter.com/YCajksiCLU

“We are working to confirm the identities of people, including those who died and were injured,” police said. "People are seriously injured, so identifying them is difficult."

Among the injured are American couple Matthew and Lauren Urey from Richmond, Virginia, who were honeymooning in New Zealand.

“She said they were going to the volcano,” says Lauren's mother Barbara Barham. "My husband jokingly said," I hope this is not a living volcano. "

Relatives reported that Matthew left his family a voicemail informing them that he and his wife had been badly burned. Royal Caribbean later contacted them.

Matthew received burns about 80% of his body, and Lauren - about 25%, she will have surgery, family members told the TV channel. The family is now on their way to New Zealand.

Sylvain Plasse, the passenger of the ship, said he saw the couple the night before in the rest room.

“This was his first cruise, and she had already been on several, and she said: 'We are on our honeymoon and so we go on excursions at every stop.' I noted that this was my 105th cruise and we started talking. I didn't see them in the living room last night and there were rumors that there were a newlywed couple on the island. The news clip confirmed to me that it was them, ”Plasse told New Zealand media. "Life is so short and can change in an instant."

On Tuesday, about 30 survivors remain in hospitals around the country. The first confirmed dead was a local resident, Hayden Marshall Inman, a guide who drove tourists around the island.

Former Fakatane Mayor Tony Bonn said Marshall Inman was a keen fisherman. According to Bonn, he was so kind that he often left extra money at the grocery store for those who find it difficult to pay for their purchases.

Marshall-Inman's brother said: "He died doing what he loved."

Australian Prime Minister Scott Morrison said 11 Australians were missing and 13 were hospitalized. Many people wonder why tourists are still allowed to visit the island after seismic monitoring experts raised the level of anxiety about the activity of the volcano last month.

“These questions must be asked and answered,” Prime Minister Jacinda Ardern said in parliament.

Local residents laid flowers at the fence on the embankment, not far from which rescue boats returned with the wounded.

On the island of White Island, where a volcano erupted in the morning, there are no signs of living people, this was shown by reconnaissance flight, writes Air force. The police say that all living people found on the island were evacuated. Shortly before the eruption, several tourists strolled along the edge of the crater.

The eruption began around 14: 11 local time (01: 11 GMT). Michael Schade was in a boat, which at the time of the eruption was leaving from the island. He photographed a column of thick ash and smoke rising from a volcano.

He said that he walked inside the crater just 30 minutes before the eruption. “There was no particular danger, but they [organizers] limited the number of people who went to see the volcano,” he said.

On the subject: Volcanic eruption in Italy: people threw themselves into shock in the sea, a tourist was killed. VIDEO

“We just got into the boat ... and someone pointed [to the eruption], and then we saw it. I was shocked. The boat turned back and we took a few more people off the pier, ”he added.

“Two excursions were planned to the volcano for this day. One of them was ours, we went there first, ”he said on his Instagram.

“The next excursion started right after us and, unfortunately, they did not manage to get out in time, and some people got serious burns,” he added.

The eruption hit the video taken from the satellite. It shows that there are people in the crater, after which everything darkens.

The Isle of Wight, also known as the indigenous Maori Whakaari, is the summit of an underwater volcano. At least 10 people were killed on the island in 1914 - then part of the crater wall collapsed, a landslide destroyed the miners' village and the mine itself. The island became a private scenic reserve in 1953 and daily tours allow it to host over 10 people each year.

On December 3, the monitoring site GeoNet, which monitors dangerous geological processes, reported that the volcano is likely to enter a period when the probability of eruptions is higher than in a normal state. However, the report noted that the level of activity of the volcano at that time did not pose a danger to visitors to the island.

Climate change: scientists warned of the threat of flooding homes around 1 billion people

Wife pulled her husband out of the crater of a volcano