Egis Klimas came to the USA from Russia almost 30 years ago. First, he worked as a collector of pizza boxes, then caught crabs, then became an international businessman, and today he is the best manager in boxing.

He knows that President Donald Trump wants to build a wall and change immigration policies so that people from other countries find it harder to move to the United States. Such people as Klimas himself. He also knows that his story speaks more than any protest demonstration. And that his achievements - in particular, the title “Manager of the Year” from Boxing Writers Association of America in 2016, they speak for themselves.

“I don't like politics,” says Klimas. - I am not a politician. I am an ordinary person, like all people. ”

This is true, but not quite. Recently, Klimas helped Ukrainian boxer Vasily Lomachenko prepare to fight for the title in the second featherweight title against Jason Sosa not far from Washington, near Trump's new home. It is difficult for him to keep from the memories of his life, which always seemed unreal even for himself.

Klimas grew up in Lithuania and served the 2 of the year in the Russian army - built garages in which the bosses kept missiles. When the service is over, the organization International Rescue Committee made him an offer he couldn’t refuse: to move to the USA. They gave him food coupons and found temporary accommodation. Klimas asked a member of the organization which city he liked best in America. He answered: Seattle.

After stopping in Austria and Italy, Klimas arrived in the Emerald City in 1989. He had $ 42 in his pocket. “The city lay right in front of me, in full view,” he says. - I looked at these huge buildings and felt like nobody on this planet. Something like: heck take it, that me делать?». 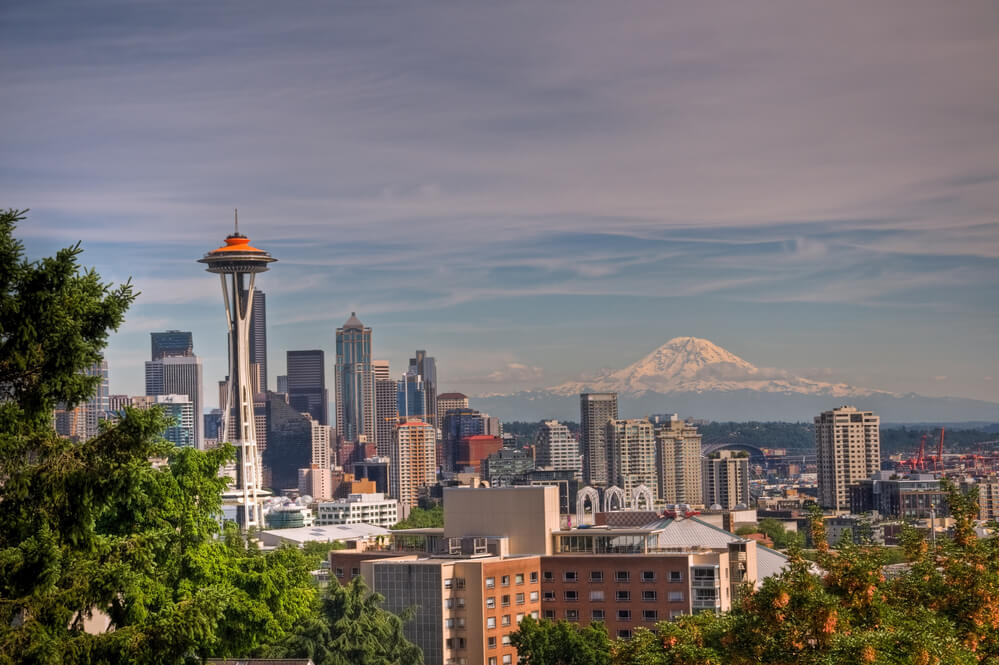 These feelings lasted in him 3 of the day, until Klimas found his first part-time job in the most American of all companies - Pizza Hut.

He went to one of the restaurants, murmured work и job. The manager taught him to fold recognizable cardboard pizza boxes and immediately hired to work.

In his spare time, Klimas was engaged in fishing - he caught trout and salmon in local lakes and streams. Somehow, it took him 45 minutes and the help of a friend to pull out the 2,5-meter sturgeon in the Columbia River.

All this led him to the next job. A familiar Lithuanian woman offered Klimas a job in Alaska, on her husband's crab vessel. The payment was 3 times higher than Pizza Hut.

He worked like a slave, 20 hours a day, 3 months in a row, stuffing fish nets for crabs. Klimas saved up $ 15 thousand and returned to Seattle, where he drove trucks during the day and delivered pizza at night (again, pizza!).

In the 1990s, Klimas began sending American goods to friends in the USSR. Sneakers first. Then TVs. Later - refrigerators. Then he took up the wholesale supply of goods, for example, timber. He opened his own firm and hired a team that dismantled a sawmill in Oregon, sent the parts to a Russian island, and reassembled them. Another business was born on this - Global Food Importerswho shipped shrimps and other products to the USA from Thailand.

But all this has nothing to do with boxing, except that the business has given Klimas the opportunity to turn his favorite hobby into a permanent career. He boxed a bit in his youth, and after moving to America, he began to actively follow this sport. He liked the 90's heavyweights very much: from Mike Tyson to Evander Holyfield and Riddick Bow. “I never, never would have thought that I would work in boxing,” says Klimas.

He set aside enough money for a flight to Las Vegas on 1992 to watch Holyfield fight with Bow. Klimas stayed at the hotel The Mirage, and bumped into Leon Spinks. That weekend seemed like a dream, an American dream, in a country that had built a street full of casinos in the middle of the desert. After all, he arrived only 3 years ago - and here he is.

Approximately 10 years later, Klimas met Don Turner, a boxing coach known for his work with Holyfield. Turner then told Klimas something that greatly surprised him: “Find me Russian boxers”. Klimas found - two local residents of the Seattle suburb who worked there in the gym. They subsequently moved to North Carolina to train with Turner.

None of these athletes met expectations, but by that time Klimas had the right connections. In 2003, a friend called him and enthusiastically extolled the crushing puncher - Kovalev. He was not strongly supported in the Russian Federation, but he had a good and strong blow. If you train him correctly, a friend told Klimas, this boxer can become a champion. Klimas called Kovalev, then met with him in Kazakhstan, and they signed a contract that later changed the lives of both of them.

Klimas paid him coaching, room and board, and Kovalev became a light heavyweight champion. This boxer was so afraid that he got the nickname "Crusher" (Krusher). At the same time, while Klimas was unwinding the “star” of Kovalev, he found a Ukrainian Lomachenko, one of the best amateur boxers, a two-time Olympic gold medalist (2008, 2012).

Klimas brought Lomachenko to the USA, where they visited several promoters, among whom was the office of Bob Arum, the founder and head of Top rank boxing in Las Vegas. Arum was just in Los Angeles, but Lomachenko bought a ticket to the first class of the plane and immediately signed a contract with him. Boxer did not even ask for a lift - he just wanted a title fight. In the 50 years of promoting boxers with Arum, this happened for the first time. Lomachenko won the world title in the third battle.

Ukrainian Lomachenko is so good that Arum, who worked with boxers from Mohammed Ali to Oscar De La Hoya, Floyd Mayweather and Manny Pacquiao, does not skimp on compliments. “He’s the best boxer I’ve seen since Ali,” says Arum. - He is a master, a genius. He does things that no one else does - his ability to keep balance, his geometric abilities and an incredible sense of time. ”

The fact that Lomachenko and Kovalev - boxers from two countries at war with each other - chose the same American immigrant as their manager proves that anything is possible in America. Athletes listen to Klimas, because he is from the same place where they come from and lived where they lived. He also had to fight. He also had a chance to reach heights in his profession far from his homeland. They know that Klimas has gone from housing for the poor to a villa in California with walls adorned with boxing awards. They dream the same thing.

Max Levchin: a success story and the rules of business by the creator of PayPal

Svetlana Alliluyeva: the difficult fate of Stalin's daughter in the USA

Why, after 25 years, the Russian woman returned from San Francisco to Saratov

“I couldn’t force myself to hate America”: the incredible history of the Soviet spy in the USA

How Ukrainian artist conquered the elite of the USA

Evgeny Grishkovets - about the failed emigration, love for Russia and a house in Greece