Home Our people The success story of Anna Netrebko: from the Russian province to world glory

Anna Netrebko is one of the most famous and popular opera singers, who, born in Russia, is currently a citizen of the whole world and lives in Vienna (Austria) and New York.

Her voice delights millions of viewers, in the artist’s personal collection there is a huge variety of various awards, says the official Online Netrebko.

Her performances were applauded by the best halls of the world, and among the fans there are famous businessmen, politicians and cultural figures.

Anna Netrebko was born and raised in Krasnodar, her father worked as an engineer, and her mother - a geologist.

While still at school, she became a soloist of the Kuban Pioneer musical ensemble, with which she performed at the Krasnodar Palace of Pioneers. After graduating from high school, the young singer realized that she wanted to further improve her talent - Netrebko went to Leningrad, where she successfully entered the music school on the course of Tatiana Lebed. She studied for 2 years, but did not wait for graduation.

Quitting halfway started, Anna decided to try her hand at the entrance exams to the St. Petersburg State Conservatory. N. A. Rimsky-Korsakov. The competition was very solid, however, the singer's excellent vocal details blazed her way up. In 1990, she entered the conservatory and began to learn vocals from the famous teacher Tamara Novichenko.

The next stage on the way of her formation as a singer was the victory at the All-Russian vocal competition. This success was an important stage in Anna Netrebko's career - she received the boost of self-confidence she needed, and with it the opportunity to audition at the Mariinsky Theater

Debut on the big stage

The singer received her first role in the Mariinsky Theater immediately after the audition. The director Valery Gergiev, who was present at the viewing, was so impressed by the unique talent of the singer that, without hesitation, he gave her the main role in the production of Le nozze di Figaro.

Thus, in 1994, Anna Netrebko made her debut on the stage of the Mariinsky Theater. The debut work was successful, and subsequently the actress often appeared before the audience, performing significant roles in various productions. For several years, Anna became one of the leading soloists of the theater. Among her most significant roles were roles in the operas Ruslan and Lyudmila, Boris Godunov, Tsar's Bride, Engagement in the Monastery, Barber of Seville, Somnambula, Rigoletto, Lucia di Lammermoor, “La Boheme”, “Don Juan” and others.

Soon, together with the Mariinsky Theater troupe, Anna began touring extensively, concerts of the opera diva were held in Finland, Germany, Israel, and Latvia. A few months later, Anna Netrebko appeared before the American audience. Performances on the opera stage in San Francisco brought the first international success to the singer. After that, Anna Netrebko began to appear frequently with concerts in the United States and Western Europe.

One of the most significant successes in the singer's career was the play “War and Peace”, staged at the Metropolitan Opera, as well as the staging “Don Juan”, presented by conductor Nikolaus Arnoncourt at the festival in Salzburg, Austria. During this period, they talked about Anna Netrebko as about a new superstar.

She received Austrian citizenship and began touring around the world, performing with the best orchestras and the best musicians of the planet.

At the moment, Anna Netrebko is in the TOP-10 of the most popular and famous Russian artists. Her personal fortune is estimated at $ 3,75 million. The cost of one of her performances reaches $ 50 thousands.

Although Anna herself interview with "Arguments and Facts" said she does not think she earns a lot.

“I don’t know where the rumors about my and my husband’s crazy fees at the opera come from. Someone wrote that I have millions. Maybe they took the number of discs sold? There are indeed about 4 million of them sold, but that does not mean that I have such an annual or monthly salary. In fact, with this profession, we earn decently. But I pay a huge amount of taxes - almost 50%. Plus, I have to pay for apartments and support the people who work for me. By the way, both of my apartments - both in New York and in Vienna - were bought on a mortgage. I will have to give a loan in the bank for another 20 years, ”she said.

Estimated Forbes, the opera diva is on 29 place among the richest Russian celebrities. The publication estimated its condition in 2,5 million dollars.

The singer’s personal collection of awards includes the Golden Sofit, the German Media Award, the Golden Gramophone, the Casta diva Award, as well as the Classical BRIT Awards and many others.

For a long time, Anna Netrebko met with the Uruguayan singer Schrott Erwin. After a lengthy romance in 2007, the engagement of two celebrities took place. The holiday celebrations took place in New York. In September 2008, in one of the Austrian clinics, the singer gave birth to her beloved son Thiago. The boy is autistic, so the star knows firsthand about this problem.

“Autism is some kind of genetic change. Why they happen, nobody knows. Why there are so many autistic people in the world remains a mystery even to doctors. But this is a fact: there used to be one in 3 thousand of such children, now one in 150. I realized that Thiago is an autist very late, when he was already 3 years old. But I just couldn't accept it - like other mothers who find themselves in a similar situation. How it is? Naturally, there was a shock, and in general a nightmare, and all the work ... He did not speak - he was silent. Rather, he uttered some isolated words. They say that autistic people don't look in the eyes. Not true, he looked in the eyes. And he smiled, he was absolutely normal. But it happens that you turn to him, but it is as if you are not there for him, he is in some kind of world. He can't tell you how the school is going. At first it was the end of the world for me. But then I very quickly got myself together and said: "So, there is no time to wait, we must act quickly." The sooner you act, the better the result - that's all, ”Netrebko admitted.

She advises all mothers of such children not to become hysterical, but to act.

“The only thing I can tell the mother of an autistic child is to find a professional who will work with him, and the more hours a week, the better. They have their own system, toys, they force children to play some special educational games. Mom will not be able to do this, absolutely for sure, "- said the singer.

In November, Netrebko's 2013 broke up with Erwin.

And on December 29 2015, in Vienna, she married the Azerbaijani tenor Yusif Eyvazov, with whom she was engaged a year earlier.

2017 year the family met in the United States in traditional Christmas funny sweaters and masks. 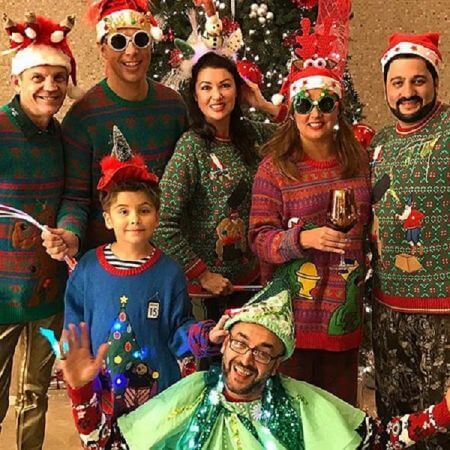 The family also attended the opening of the Christmas Tree at Rockefeller Center in New York. Thiago was wearing a Statue of Liberty costume. 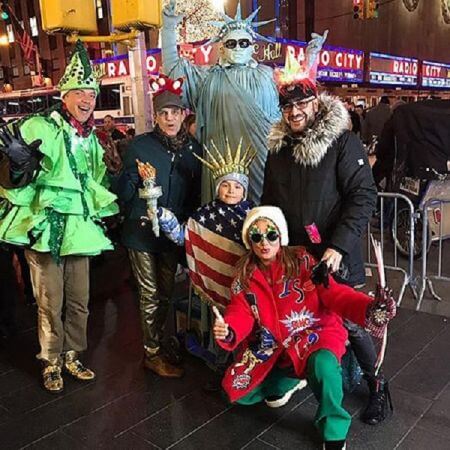 As a Russian journalist working in the American McDonalds

Valentina Shevchenko: how a girl from Bishkek became a star fighter in the USA

Maria Daume: from a Siberian prison to the first female marines in the United States

Success story: Sofia Groisman - the queen of perfumery from Belarus