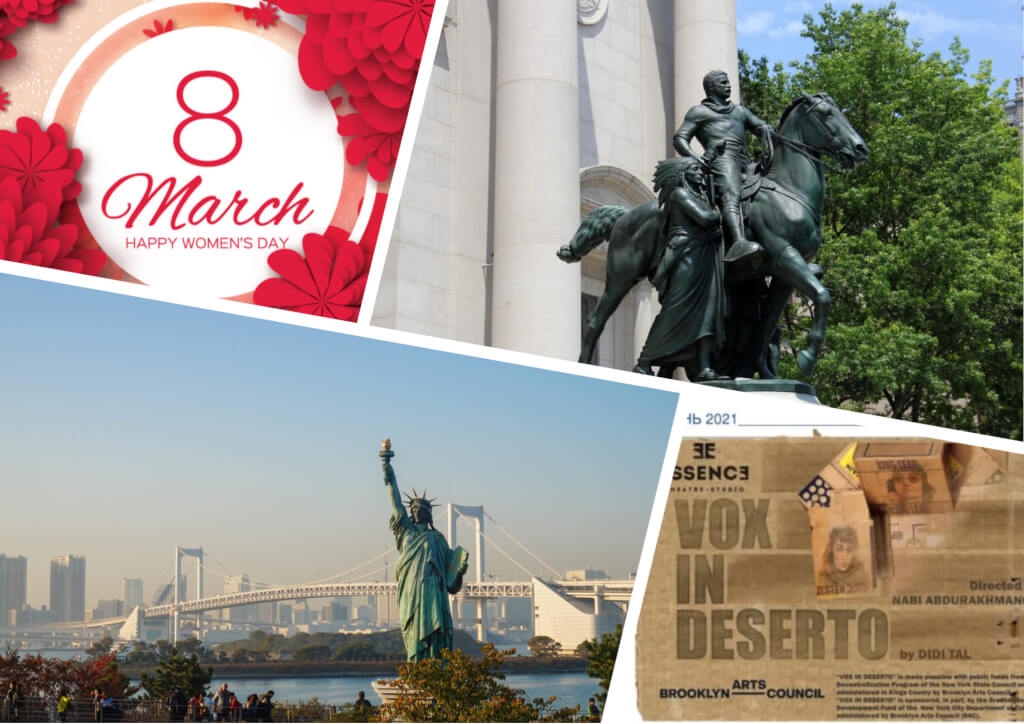 What: Exhibition about the statue of Roosevelt on horseback

The statue is intended to glorify Theodore Roosevelt as a devoted naturalist and author of works on natural history. Roosevelt's father was one of the founders of the museum, and now the museum is proud of its historical connection with the Roosevelt family.

At the same time, the statue itself conveys a racial hierarchy that the museum and the public have long considered troubling. What does this statue mean? How do we look at this historical sculpture today?

What: Exhibition "Space between"

More: For many years, Matt Nolen has been creating ceramic figures. When he was diagnosed with cancer in 2012, he struggled to cope with issues related to mental, emotional and physical well-being and mortality. He eventually began to explore this space through the abstraction, ambiguity and hybridity of porcelain. The idea of ​​endlessly splitting cells made him think about the new spaces that are created by splitting a shape versus the apparent strength, weight, and mass of tumors that develop as a result of cell division.

In the exhibition Space Between, he explores the connection between the micro-landscape of the body and the macro of the social and political environment of the external world.

More: Regardless of whether you are an experienced senior or just starting your career, this event will help you to get a huge amount of valuable contacts with employers.

At this job fair you will have the opportunity to have an interview with representatives of both small local organizations and large companies.

Photo courtesy of the event organizers

More: The Brooklyn Bridge 2021 Festival, which runs from March to June, is a series of performances by Russian-language theaters from around the world. You will be able to get acquainted with new works of talented figures of the Russian theater from different countries.

And these are not just video performances, but a kind of new genre - performances created precisely online in a fit of communication with the viewer.

Within the framework of the festival, you will see the performance Vox In Deserto (Latin for "Voice in the Desert"). The name refers to the catch phrase from the Torah “The voice of one crying in the wilderness”, which has become a symbol of the desperate call of a person that no one can or wants to hear. In the story, two lonely refugees, two former famous actors, found themselves on the streets of a foreign country and a foreign city. Their main wealth is the roles of King Lear and the Jester, which they try to play for the audience on the street in front of the entrance to the local theater.

Before the performance, the audience will have the opportunity to communicate with the director and actors involved in the production, and after the premiere - to hear the opinions of authoritative critics, who will watch the performance together with everyone. It will become a real creative evening, a cultural recreation for theater-goers, who have been deprived of the vital opportunity to go to the theater and get in touch with the world of art throughout the year.

The performance will take place online in Zoom. You can buy tickets at link.

More: One Art Space is proud to present the Fifth Annual International Women's Day. It was first celebrated in New York in 1911 and has historically been used to draw attention to the many deprivation and oppression faced by women around the world. Suffragettes established International Women's Day to unite and empower women in their fight for equality, and to this day, it continues to inspire people, stand firm in the face of adversity, honor powerful women and organize direct action to move our society further towards eliminating gender inequality.

More: At this farmers' market you will find fresh fruits, vegetables, dairy products, fresh cut flowers and locally sourced pastries. It's a great place to have a fun weekend and stock up on healthy, fresh produce.

More: Artists and arsonists, punk rockers and panicked bankers, sex workers and serial killers - New York in the 1970s and 1980s was a tale of two different cities. One of them with terrible economic and physical difficulties, the second with great artistic and sexual freedom. This is the story of one local resident, who experienced it all first hand, about what the Big Apple was like in one of the most severe modern eras.

Join the New York Adventure Club to explore the roots of the 1970s New York financial crisis and its impact on five Manhattan boroughs over 20 years with us.

What: Baratynsky Day in Russian

More: Evgeny Abramovich Baratynsky was born on March 2, 1800. Alexander Pushkin called him the best Russian elegiac poet. After a long period of oblivion, Baratynsky was adopted by Russian modernist poets, who considered him the supreme poet of thought. This "most daring and darkest poet of the nineteenth century", as Michael Wachtel called him, inspired Anna Akhmatova and Osip Mandelstam, and later, according to the Nobel laureate himself, forced the young Joseph Brodsky "to take up writing more seriously."

Dear readers! Please note that due to the epidemic of coronavirus infection, some activities may be canceled or rescheduled for other dates. Therefore, before visiting, we recommend checking the information on the sites of the organizers.

But we have collected many interesting events for you online:

In addition, look for interesting events for every day of the week in our calendar... Come in, find out, share with your friends. Before visiting, check the organizer's websites for details and locations of events, as they may change.

Keep us informed about what is happening in your city. Send information about events for the Russian-speaking diaspora by mail ad@forumdaily.com.