Home Page In the U.S. 'They did it to make me look bad': Trump condemned the construction by his supporters of a section of the border wall

'They did it to make me look bad': Trump condemned the construction by his supporters of a section of the border wall

On July 12, US President Donald Trump announced that he did not approve of the construction of a Texas-built private border site that was funded by a group of supporters, claiming that "it was just to make me look bad." This site may be unstable due to erosion, writes USA Today. 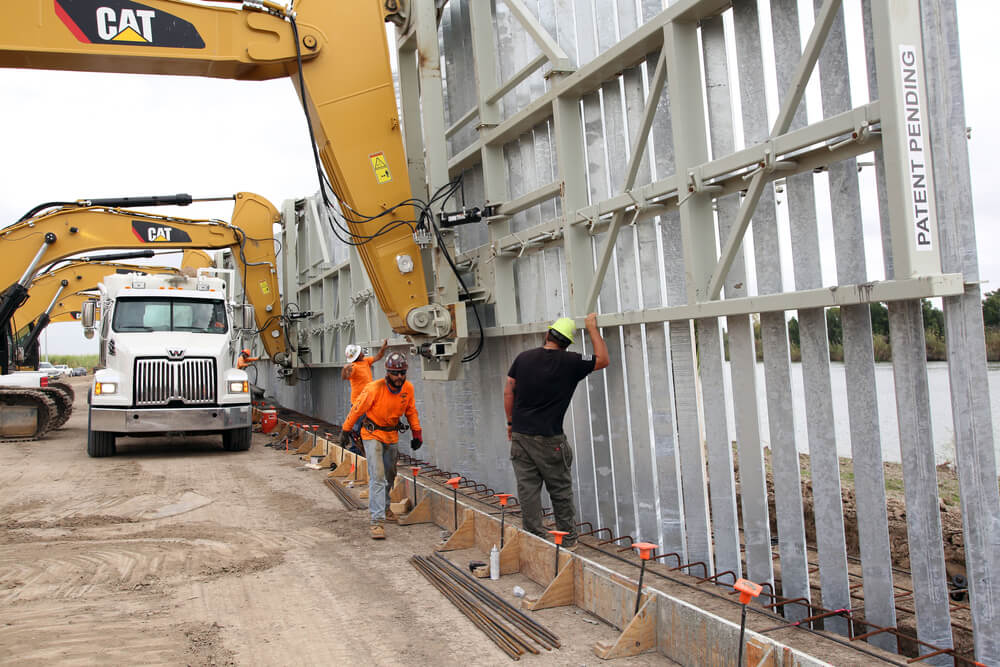 Construction of a private fragment of the wall. Photo: Shutterstock

“I disagree with the construction of this very small (tiny) section of the wall in a difficult area by a private group raising money through advertising. It was only done to make me look bad and now it doesn't even work. It was to be built like the rest of the wall, more than 500 miles long, ”the president wrote on Twitter.

His tweet provided a link to an article in the ProPublica and Texas Tribune, which says that a 3-mile (4,8 km) stretch of steel fence 18 feet (5,5 m), built on the banks of the Rio Grande, runs the risk of collapse.

A group called We Build the Wall raised money to privately build part of the fence, in response to “politicians on both sides obstructing President Trump’s plan to build a wall on our southern border.”

It all started as a GoFundMe campaign, created by Brian Kolfadzhe in December 2018 against the backdrop of the closure of the government, caused by Congress's reluctance to approve the funds that Trump asked for the construction of a new border wall. This wall was a central part of the 2016 presidential campaign. Coalfage later registered the group as a nonprofit organization that raised over $ 25 million.

On the subject: California startup to build 'virtual wall' on border with Mexico: the essence of the project

The organization’s board includes former White House adviser Steve Bannon, and Trump's ally, Chris Kobach, has become his chief legal adviser. It is unclear why Trump believes that the wall section that the group helped build was designed to make him “look bad.”

Following Trump's tweet, Kolfage published his own statement stating that the private section of the wall was approved by the presidential administration.

“The private wall @WeBuildtheWall built and funded was @DHSgov @CBP, cleared and approved by the [Department of Homeland Security and US Customs and Border Protection]. Never forget about it, ”said Kolfadzh.

We Build the Wall built a wall, providing about $ 1,5 million for a $ 42 million project in Mission, Texas.

Fisher Industries, a North Dakota-based company, received a $ 1,3 billion federal contract for the construction of the Arizona border wall, which is the largest such contract to date. Another $ 400 million contract won by Fisher last year was reviewed by the inspector general of the Department of Defense.

Fisher Industries CEO Tommy Fisher told The Associated Press that he has “full respect” for Trump, but believes he “just got some misinformation about all this.” He acknowledged that erosion did indeed form around the fence, built about 35 feet (10,6 meters) from the Rio Grande, the river that defines the US-Mexico border through Texas. But he said that his company is solving this problem.

“The wall will stand for 150 years, mark my words,” predicted Fischer.

Fisher touted the barrier built by his company as Lamborghini among the walls, promising that he could build the wall faster and better than the government, and used it as a showcase to win more federal contracts.

We Build the Wall promoted the Mission's section of the wall as "the world's first Texas border barrier actually built within a few feet of the border, rather than a few miles, as the US Army Corps of Engineers has been doing for decades."

On the subject: Illegals crawl and crawl: the border service complained about the vulnerability of the Trump wall

But engineers who saw signs of erosion told the ProPublica and Texas Tribune that there were good reasons not to build a wall so close to the river.

“When the river rises, it will likely enter the areas where the foundation is exposed, further weakening the support of the fence and possibly causing the sites ... to fall into the Rio Grande.” - Alex Mayer, professor of engineering at University of Texas at El Paso, the ProPublica and Tribune report says.

Building near the river has also led the US government to sue Fisher Industries on behalf of the International Border and Water Commission, claiming that building a wall at this site violates international treaties governing the use of the river.

On July 8, a federal judge issued a decree requiring Fisher Industries lawyers and opponents to build a private wall site to schedule an expert visit and erosion inspection.