Home Page In the U.S. Obama's former adviser accused of illegal lobbying in favor of Ukraine

To Greg Craig, a former White House adviser to President Barack Obama, 11 of April was charged with giving false testimony and misleading investigators, including the team of special adviser Robert Muller. 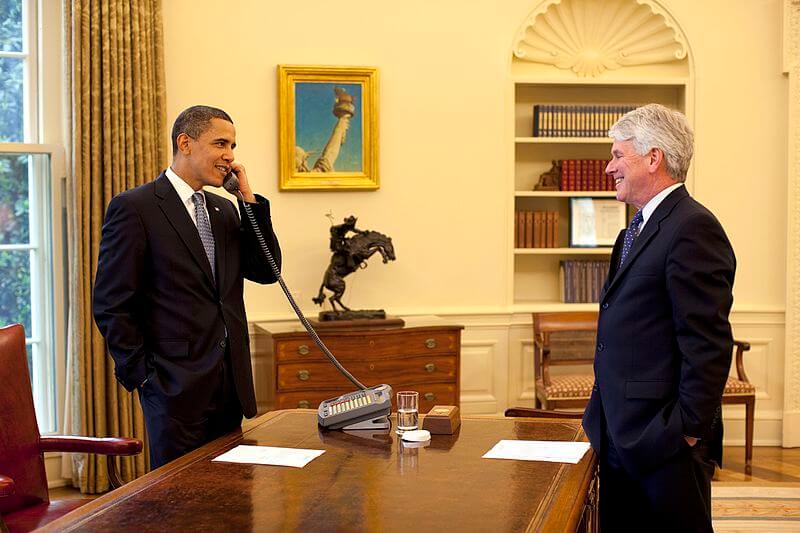 It is about the information sounded by him about his work to promote the interests of the former President of Ukraine Viktor Yanukovych, writes Fox News.

Craig is the first prominent Democrat to be indicted in a case stemming from Mueller's already completed investigation into Russian interference in the US elections. Mueller referred Craig's case to prosecutors in New York last year after uncovering a possible misconduct by the politician that surfaced during an investigation into illegal lobbying for Ukraine by former Trump chief of staff Paul Manafort.

Craig, a lawyer in Washington, was accused by a jury in the US District Court for the District of Columbia for allegedly falsifying and hiding “material facts” and giving false testimony to Muller, violating the law on registering foreign agents and not filing documents in the interests of Yanukovych in the Division of Foreign Agents Registration of the US Department of Justice (FARA).

FARA is responsible for complying with laws on lobbying foreign interests in the United States, requiring disclosure of information about certain foreign activities of Americans, including public relations work for foreign companies.

The charge against Craig concerns lobbying interests and contacts with Yanukovych in 2012, when Craig was a partner in the law firm Skadden, Arps, Slate, Meagher & Flom.

In particular, Craig and the law firm were commissioned by Yanukovych and the Ukrainian government to write a report arguing that the prosecution of former Ukrainian Prime Minister Yulia Tymoshenko was a “fair trial,” not an abuse of power, as Western politicians believed.

The purpose of this report was to provide a cover for what critics described as clearly politically motivated prosecutions, and Manafort and other lobbyists eventually used the document to increase Yanukovych's profile in the international community. But if Craig and Skadden, Arps, Slate, Meagher & Flom were registered with FARA, Ukraine's payments for this report would be made public, which would reduce the level of credibility of the report, since it would no longer be considered independent.

On the subject: The US Embassy forced Ukraine to abandon inspections of Soros funds during the American elections

In the indictment, prosecutors referred to several emails between Craig and the co-author of the report, including one letter of April 2012 of the year in which Craig wrote that the report being prepared would help Yanukovych "look better in the eyes of the West."

Although Ukrainian officials said they paid only $ 12 for the report, prosecutors said Manafort illegally used the offshore account to get Skadden, Arps, Slate, Meagher & Flom about $ 000 million for its services.

In February, 2012, according to the prosecutors, Craig sent a letter to the co-author of the report, which said: “I don’t want to register as a foreign agent with FARA. I think we shouldn't do this by completing this task, right? ”

In April of the same year, Craig wrote in another letter: “I don't care who you ask [about FARA requirements], but we need an answer from someone we can rely on.”

15 December 2012 of the year, after the publication of the report, the lobbyist wrote to Craig that the press coverage was very extensive: "You are back in the headlines of international news ... People in Kiev are very happy."

Yanukovych was ousted from the post of President of Ukraine as a result of the 2014 revolution of the year and has since been living in exile in Russia. Tymoshenko, who was also one of the leaders of the Orange Revolution, was convicted on charges of embezzling budget funds in 2011, but was released in 2014 after the overthrow of Yanukovich.

In 2013, the US Department of Justice sent Skadden, Arps, Slate, Meagher & Flom a letter informing that the firm and Craig's cooperation with Ukraine required them to register as foreign agents. In response to this request, Craig provided false information to the general board of directors of the law firm where he worked.

October 19 2017, according to the indictment, Craig repeated the same lie to Muller’s team, providing misleading information about his contacts with journalists regarding the report.

“The purpose of this scheme was Craig's desire to avoid registration as an agent of Ukraine in the United States. Registration would require disclosure of the fact that a private person in Ukraine paid Craig and his law firm more than $ 4 million ... and would undermine the alleged independence of Craig's report, ”reads the indictment.

On the subject: Scandal with the US ambassador to Ukraine: more and more politicians are calling for dismissal of Jovanovic

It is not clear why Muller, who was harassing Trump's headquarters officials, including Manafort, Michael Flynn and George Papadopoulos for false testimony, did not himself consider the Craig case and decided instead to turn it over to prosecutors in New York.

Violations of the FARA requirements were rarely pursued, until Muller took up Manafort because of his lobbying activities in the interests of Ukraine. Manafort, who considered Yanukovich to be one of his most lucrative clients, was convicted on numerous banking and tax fraud charges and separately charged with FARA violations. Early this year he was sentenced to 7,5 years in prison.