HOME culture Dostoevsky in America: the play 'Prince Myshkin' will be shown in the USA

Residents of the United States on April 24 will be staged “Prince Myshkin" - one-man show by Armen Kushkyan based on the novel by Fyodor Dostoevsky "The Idiot", staged at the Gabriel Sundukyan National Academic Theater (Armenia). 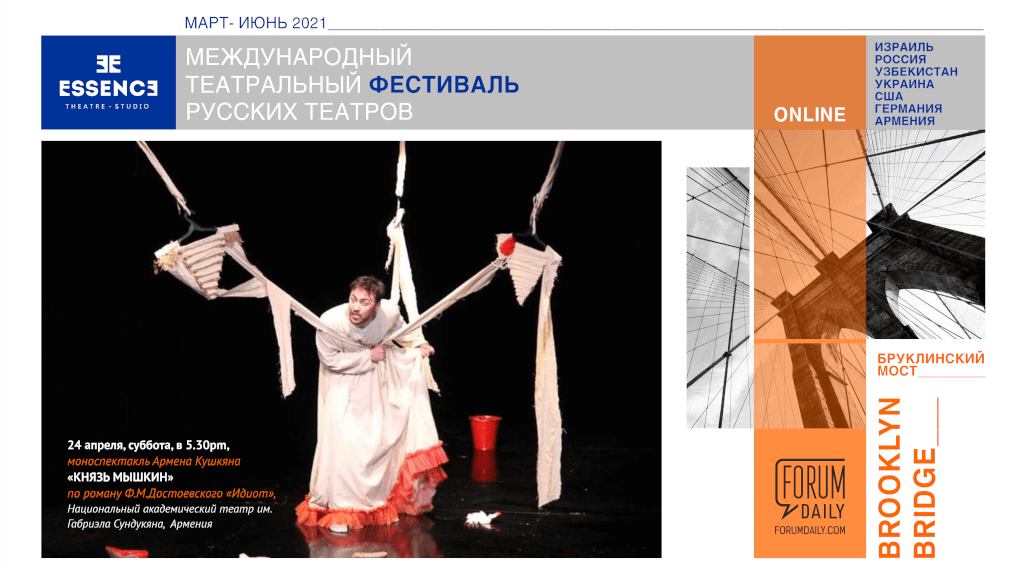 The performance will take place online using Zoom, tickets can be purchased link.

Prince Myshkin after the murder of Nastasya Filippovna by Rogozhin found himself in the house of sorrow. Here, over and over again, he experiences everything that happened, feels guilty for not being able to prevent the death of his beloved woman. The hero's long white shirt turns into her dress, at least this way he can prolong the life of his beloved. The young actor masterly, brightly and emotionally transforms into numerous characters related to tragic events. Thus, Prince Myshkin remains alone ... He drowns in the dress, dissolves in it and disappears into oblivion. And Prince Myshkin, a man-angel, goes into the light, where no one is allowed to look during his lifetime ...

The second title of the production is Prince Lev Nikolaevich Myshkin in the role of Nastasya Filippovna.

The performance will take place within the framework of the festival «Brooklyn Bridge - 2021», which takes place in the United States from March to June. This is a series of performances by Russian-language theaters from all over the world. You can get acquainted with new works of talented figures of the Russian theater from different countries. The festival program includes theaters from Russia, Israel, Armenia, Ukraine, Uzbekistan, Germany, Belarus and the United States.

And these are not just video performances, but a kind of new genre - performances created precisely online in a fit of communication with the audience.

The National Academic Theater named after Gabriel Sundulyan was founded in 1922 in Yerevan and is the oldest modern theater in Armenia.

The director of the play is Vahe Shahverdyan - People's Artist of Armenia, artistic director of the theater named after H. Abelian, one of the leading directors of the country ․