Home In the U.S. A member of the Trump administration resigned because of a criminal case against a friend of the president

The head of the US Department of Labor, Alex Acosta, was forced to resign because of a scandal with famous billionaire Jeffrey Epstein, who is accused of trafficking in people and bribing potential witnesses. He writes about it with the BBC. 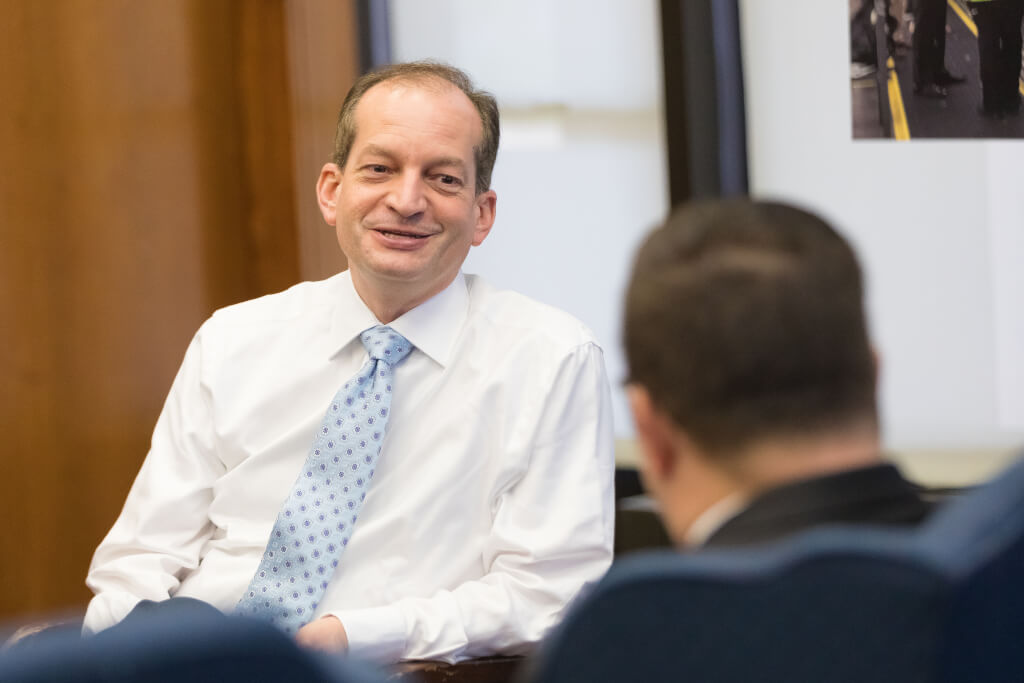 Against the background of the Epstein scandal, the head of the US Department of Labor, Alex Acosta, was forced to resign. He was in charge of the case of Epstein, who was accused of inciting minors to prostitution, as the Florida Prosecutor General in 2008. Epstein then received just 13 months in prison, and Acosta was criticized for too soft out-of-court agreement with the entrepreneur.

Epstein's 66-year-old was detained at Teterboro Airport in New Jersey, where he flew from France on a private jet.

According to the prosecution, in the 2002-2005 years, the billionaire invited girls, the youngest of whom were 14 years, to their homes in Florida and in Manhattan in New York. For sexual services, he, according to the prosecution, paid the girls hundreds of dollars. Epstein himself denies all accusations and insists that the meetings took place by mutual consent, and he was sure that the girls were adults.

On the subject: In the US, a criminal scandal unfolds: under the gun Trump and Clinton

According to the New York City Prosecutor’s Office, Epstein allegedly transferred two unnamed persons who could have been called 2018 thousand dollars to witnesses at the end of 350, which prosecutors consider an attempt to bribe witnesses.

Epstein in 1990-2000 was on friendly terms with 42 and 45 by US President Bill Clinton and Donald Trump and British Prince Andrew. The financier may face up to 45 years in prison.

On the basis of additional charges, prosecutors ask the court to imprison the billionaire in custody pending trial and to deny the right to release on bail. On Monday, 15 July, the court is expected to consider Epstein’s petition for release on bail.

The size of the bail was not disclosed, but the prosecution stated that the size of Epstein’s personal state is such that he has everything necessary to escape from court. He has a mansion in New York, two houses in the Virgin Islands, including one on his own island, and property in Paris, New Mexico and Florida. He also owns 15 cars and two aircraft, one of which is capable of international flights.

On the subject: Who and how much earns on the American prisons

In a court submission, prosecutors write that the 66-year-old financier paid out money to potential witnesses a few days after the media began to publish articles about the extrajudicial transaction that Epstein made with federal authorities to avoid allegations of human trafficking for sexual exploitation in 2008 .

He paid one of his possible accomplices in this case 100 thousand, and the other - 350 thousand dollars, the prosecution claims. The names of these persons are not disclosed.

“Such actions, and especially the time of their commission, give grounds to believe that the defendant tried to influence witnesses who could testify against him in the light of the recently brought charges,” the prosecutor’s statement said.

In 2005, the financier tried to judge for sexual offenses against minors, but he managed to avoid serious punishment by concluding a deal with the investigation.

On the subject: How to visit a prisoner in an American prison

What explains the resignation of Acosta?

The deal, concluded in 2008, forced the head of the US Department of Labor, Alex Acosta, to resign after criticizing himself. It was he, as federal prosecutor in Miami in 2008, who promoted the extrajudicial transaction that led to the withdrawal of Epstein’s charges.

Epstein was then blamed for the sexual abuse and exploitation of underage girls from 1999 to 2007.

The extrajudicial arrangements allowed the financier to serve the entire 13 months in prison; he spent most of this time by special permission in his own office in Palm Beach.

This deal attracted the attention of the press and the public in connection with new accusations against Epstein.

As US President Donald Trump told reporters, he spoke with Acosta on the phone and he, according to Trump, made the decision to resign.

Jeffrey Epstein was born in New York and taught mathematics and physics at the Dalton Private School in Manhattan.

In 1976, he began working in the financial sector, starting with trading in Bear Stearns investment banking company. Four years later, he became a partner in the company.

He then founded his own firm, J Epstein & Co, which managed client assets in excess of $ XNUMX billion.

He lived on a grand scale and earned a reputation as a "mysterious rich man." At the same time, little was known about him, like about his clients.

On the subject: Everything you didn't know about American police

One of those who knew him from his work on Wall Street, in 2002 described him in an interview with New York Magazine as "a Gatsby-type figure" (Jay Gatsby, the hero of the novel "The Great Gatsby" by Francis Scott Fitzgerald).

“I've known Jeff for 15 years. Awesome guy, - quoted the publication of the words of Donald Trump. - It's a lot of fun with him. They even say that he loves beautiful women as much as I do, and many of them are quite young. "

Epstein had a philanthropic reputation. In 2003, he hit the headlines by making a donation of 30 million dollars to Harvard University.

Who and how much earns on the American prisons

In the US, a criminal scandal unfolds: under the gun Trump and Clinton