Home In the U.S. Homeless people have turned the prestigious San Francisco neighborhood into a trash heap: its millionaire residents are at a loss

Homeless people have turned the prestigious San Francisco neighborhood into a trash heap: its millionaire residents are at a loss

Frightened millionaire residents of a luxury condominium in San Francisco are caught in a tricky situation after an adjoining lane became the city's largest homeless camp. Dailymail. 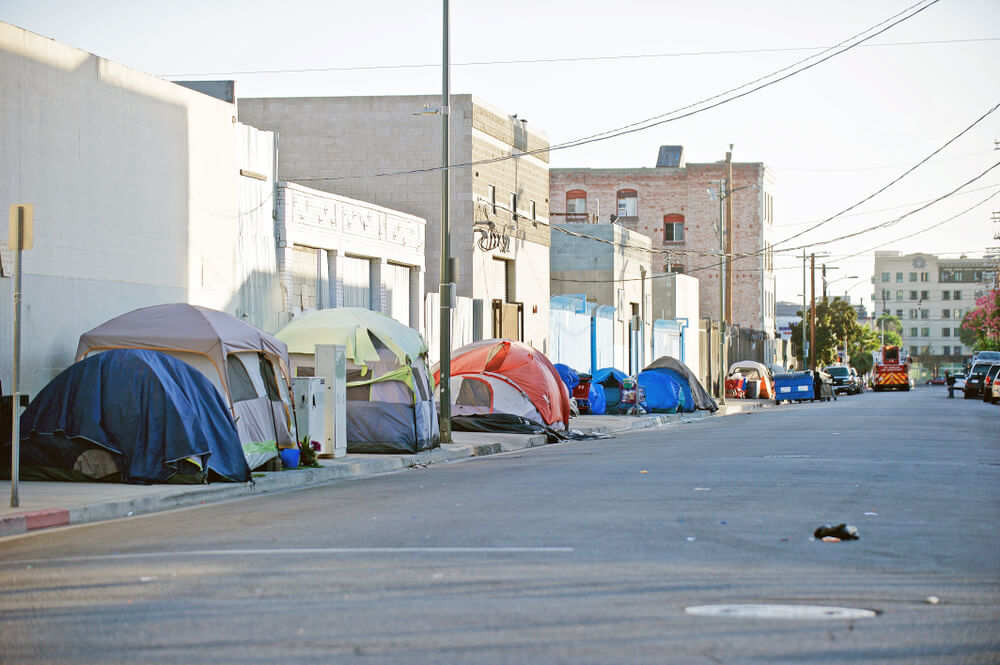 Residents of a house in Tenderloin say they are afraid to go out because of aggressive homeless people who have set up the city's largest vagrant camp.

They occupy a side street near a luxury building where the unit sold for more than $ 1 million.

It is known that one person living in the camp throws feces into the street, while others steal, break into garages and litter the area with garbage, attracting rats.

“It seems to be a safe place for butcher shops and drug dealing,” said one woman.

The camp is growing as data shows that the San Francisco attorney general is taking a more lenient approach to charge criminals with theft.

Residents of a $ 1 million apartment building in San Francisco say they are living in fear after an adjoining alley became the city's largest homeless camp.

A huge tent city, home to a feces-throwing man and a host of other objectionable characters, is just steps from Artani, an eight-story complex on Van Ness Avenue whose residents are intimidated by the growing number of wandering neighbors.

Condominium resident Amber Lusco said the camp, exacerbated by the COVID pandemic, has attracted rats, thieves and mentally disturbed adults who are turning their neighborhood into bedlam.

“It constantly gets on your nerves,” Lutsko said. "It just seems like a safe place for chop shops and drug dealing."

The complaints are coming as new data show that San Francisco District Attorney Chesa Boudin has accused people of stealing less than 50% of the time during his tenure.

On the subject: In honor of Veterans Day, 90 naturalization ceremonies will be held in the United States: thousands of immigrants will receive citizenship

Several Artani units have been sold for over $ 1 million. The current supply of one bedroom apartments is 670 units.

The building is located just off Willow Street, between Van Ness Avenue and Polk Street, home to the most populous homeless camp in San Francisco.

Another resident named Shannon said the police did little to help curb the violence and vicious behavior.

“I saw people fighting, and I myself once left, and a man came up to my car, shouted obscenely and threatened me, it was really scary,” she said. “There was a guy who passed out in front of our door with a needle sticking out of his hand. And our children had to pass it by ”.

Residents of Artani talked about vagrants throwing out feces, propping up the garage with empty bottles, stealing packages and much more.

The city reportedly cleared Willow Street in early October, but returned the tents the next day.

Representatives of the city's emergency management department said they are working to improve the situation by providing resources and services to those without homes.

“The ordinance included the removal of 377 tents that were either empty or abandoned, or their owners agreed to place them in alternative shelters,” the statement said.

Companies across San Francisco have slashed their opening hours or shut down altogether due to a spike in property thefts, and District Attorney Boudin has been criticized for "destroying the structure of our city."

The Safeway grocery store was the most recent venture to be hit by rampant theft, citing this as the reason for the cut in 6-hour service to 00:21 am - 00:XNUMX pm.

Boudin ran for office, promising that he would take a new approach to crime without prosecuting lower-level perpetrators.

He kept his promise, much to the chagrin of many locals, charging people with theft only 46% of the time since taking office.

By comparison, his predecessor, George Gascon, filed such charges in 62% of all cases in 2018 and 2019, according to city data.

Boudin now faces a recall just two years after his term, as his critics filed a petition last March that garnered more than 83 signatures, far more than the 000 needed to kick off an election.

Some of those who joined the recall came from his own administration when 50 lawyers from his office have been fired or fired since he took over in January 2020, which is roughly one-third of the department's prosecutors.

“From the beginning, he vowed not to prosecute quality-of-life crimes. The quality of life is ... the basis of society, our city. If you are not going to hold people accountable for this, you are essentially destroying the fabric of our city, ”said former Republican mayoral candidate and spokesman for the Committee to Support the Recall of District Attorney Chesy Buden.

Boudin has an even lower petty crime rate, and only indicted 35% of all charges, compared to Gascon's 58%.

Boudin also convicted far fewer people for both crimes than Gascon, finding thieves guilty of only 79% of thefts and 62% of petty thefts. Gascon has a criminal conviction rate of 82% for theft and 77% for petty theft.

Overall, Boudin charged people with crimes in 48% of all reported cases, while Gascon's figure is 54%.

According to the San Francisco Police Department, the number of attacks increased by 8%.

According to the National Alliance to End Homelessness, the number of homeless people in California increased by 17% between 2017 and 2020.

According to him, in 2020 more than 160 thousand homeless people lived in the state.

US opens borders to vaccinated travelers, but not everyone