Home Our people In California, immigrants saved a Russian restaurant from pogroms

A picture from the United States spread on social networks, which shows how the men lined up in front of a bar-restaurant called Pushkin Russia, protecting the place from the rioters. Writes about it EADaily. 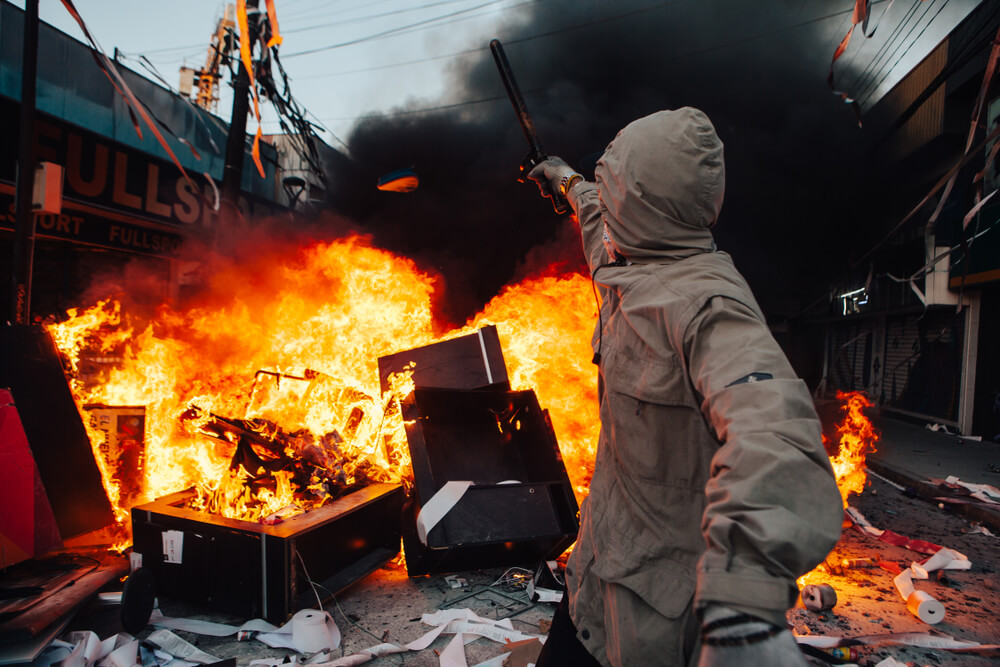 One of the first photos was posted on Facebook by a Russian from Tallinn, the head of the Antifascist Committee of Estonia Andrei Zarenkov. Under the photograph there is an inscription in English: "The Russian mafia is defending in full force."

“Our compatriot sent a photo published in the American media. The Russians defended their restaurant from defeat, ”signed Zarenkov.

Later correspondent «РИА Новости» Grigory Dubovitsky spoke in more detail about what happened. The Pushkin restaurant of Russian cuisine, well-known in the city, could really be among other looted and burned shops. But he didn’t turn out to be: with the help of “a good word and a revolver” he managed to defend the international of immigrants from the Soviet Union.

About how 12 Russian-speaking guys were not afraid of the crowd of rioters, said restaurant owner Hayk Gazaryan.

"Russian Mafia" from the USSR

The history of the restaurant became known from social networks, where a photograph quickly began to spread, in which strong, but unarmed white men stood at the sign with the inscription "Pushkin Russian Restaurant". An ironic inscription made by someone in English read: “The Russian mafia is defending in full force.” The photo naturally caused a lot of approving comments and likes from both the Russian-speaking audience and the Americans.

“When the protests began, they first said that these were peaceful actions. But then suddenly they began to set fire to banks, buildings, half a block burned down, they simply robbed the rest - bars, restaurants, jewelry stores, from where they brought everything. Like in Los Angeles and in many other cities. When I saw these burnt ruins, I realized that I needed to protect myself somehow - the police simply did not have time to come to the calls, ”says Hayk.

Ethnic Armenian and a native of Soviet Uzbekistan, 36-year-old Gazaryan emigrated to the United States back in 1998 from Pyatigorsk. But he did not lose touch with immigrants from the former USSR, and together with friends founded the Pushkin restaurant five years ago, which became a favorite meeting place for Russian-speaking residents of San Diego and the surrounding area. The name of the restaurant is not just a tribute to fashion - Hayk admits that Pushkin is still his favorite poet.

“I have many friends who, like me, are more supporters of republican thinking (as opposed to protesters. - Ed.). When on Sunday I realized that something could happen, I called them - and after half an hour they were at the restaurant. A total of 12 people arrived, all with weapons - pistols and rifles. It is legal with them, we can handle it. We cannot walk with weapons along the street, but in our own premises for self-defense, of course, we have the right to use it, ”says the restaurant owner.

From the very beginning, friends decided that, if necessary, they would defend not only their restaurant, but also neighboring establishments, including a small alcohol shop.

“This store is kept by Christian Arabs who come from Iraq. The owner there is such an old man, a wonderful person - we felt sorry for him. They always try to steal alcohol, but in our restaurant what? Yes, we also have alcohol, but hardly anyone will steal Russian food and Olivier salad, ”explains Ghazaryan.

According to him, among the protesters there are many normal people, but there are also many “gangsters” who came from other areas, from the very border with Mexico and “are looking for someone to rob here.” There are African Americans in San Diego too, but the vast majority are white and Hispanic.

“Those who want to rob are well organized, they have walkie-talkies, their scouts. They are divided into small groups, and then get together, join other protesters. There are those who are armed with hammers and bats; they beat shop windows and doors, giving others the opportunity to set fire and rob. On Sunday, we hoped that this crowd would pass by, but at some point it suddenly turned on us. How many were there? Probably more than a thousand people, ”recalls Hayk.

The chosen defense tactics required endurance and composure from the men: two with guns remained inside the restaurant for the windows to be clearly visible, and the remaining ten stood without a weapon in the street in front of the windows, covering them in case they started throwing stones and bottles. Ike can be heard on Facebook’s video as he commands his friends: “Don't provoke anyone!”

“Nobody had a panic, although my heart was beating. They walked right at us, cracking firecrackers and launching fireworks. But they saw us protecting our restaurant and the nearby shops. Not many dared to approach, and those who approached and saw the guns quickly left. Some even praised us for protecting our business, but these are the same people who smashed a pharmacy a couple of blocks before us. The fact that they are smiling at me does not reassure me, ”says Ghazaryan.

He noted that after the crowd passed, some looters still tried twice to break into nearby stores. “I had to go out and drive them away. Hearing the sound of a gun shutter, they scattered like cockroaches, ”recalls the owner of the restaurant.

According to him, on Monday evening, the protesters were about a kilometer from the restaurant, so Hayk and his friends decided to stay at Pushkin again for the night.

“We have here a real“ cocktail of nations ”or the Soviet international, which the USSR was proud of before: I am Armenian, there are Azerbaijanis, Bukhara Jews, Russians, Ukrainians. And everyone is close friends, but they do not discuss political aspects. We are a small representative office, a part of Russia in San Diego and are trying to support each other, ”Gazarian said with pride.

Perhaps the video itself does not convey the emotions that the restaurant’s defenders had that day, including the one wearing a frock coat and top hat. But on the other hand, these emotions fully convey Ike’s last words, said after the crowd passed by: “Here we have protected our heritage. Pushkin is alive! Pushkin will live! ”, Added the correspondent Grigory Dubovitsky in his Facebook account.