Home In the U.S. Investigation: Khodorkovsky hotels in the USA

Investigation: Khodorkovsky hotels in the USA

In the busiest area of ​​Miami Beach, at the beginning of Lincoln Road’s pedestrian street, filled with numerous shops and cafes, there is a typical office building in which works company “Quadrum Miami Beach”. However, for some reason a completely different name is indicated on the sign near the entrance door to the office “2-F”, on the second floor.

The secretary girl confirms that Quadrum is here, but no one is present at the moment. Asks to leave contacts. Pictures of real estate objects hang on the walls, in particular the Nautilus hotel in Miami.

Quadrum Miami Beach, LLC is a company that, if you believe the investigation of the Russian Forbesthrough a number of offshore firms owned by Mikhail Khodorkovsky and other shareholders and top managers of Yukos. 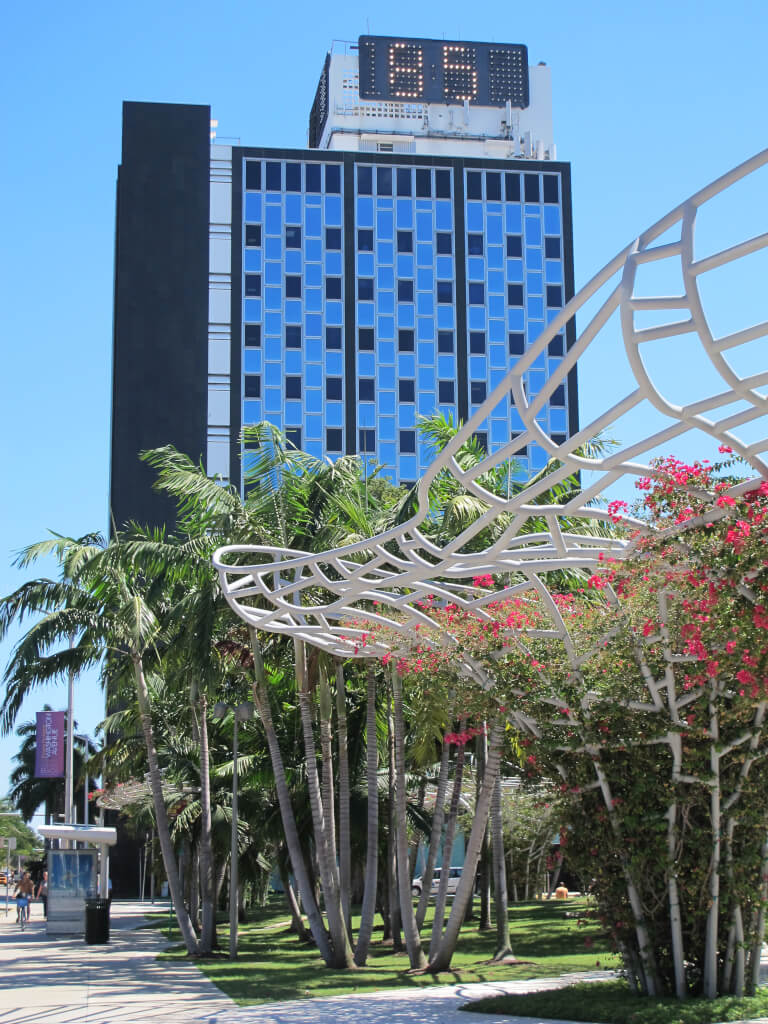 The building where the office is located "Quadrum Miami Beach"
Photo: Andrey Stolbunov

Interest in the former Russian oligarch, who has spent almost a decade in the Russian colonies, does not fade. After all, he is not going to retire and leads an active social life.

And, judging by the published information, the assets in the United States will allow all Yukos shareholders to enjoy the tropical climate, not waiting for retirement age.

On the Web site Specifiedthat Quadrum is carrying out development activities with potentially profitable real estate properties in Europe and America. After restoration and repair, the output is an expensive and sought-after product.

American assets Quadrum: two hotels in Chicago on 475 rooms, a couple of hotels in Manhattan on 575 rooms and an office building (about 12500 square meters), office buildings on Long Island with a total area of ​​7000 square. meters

In Florida, the company has three projects, these are hotels, including on the ocean.

Many holiday-makers from Russia will be able to boast rest in hotels, possibly belonging to the most famous Russian prisoner.

The first hotel is located in the place of pilgrimage for Disneyland lovers - Orlando (394 rooms); another one operating under the brand “B-hotels & resorts” - in the famous cruise area of ​​Fort Lauderdale (240 rooms); and, finally, the Nautilus South Beach hotel in the heart of Miami Beach (251 rooms), which, however, has not yet started operating. 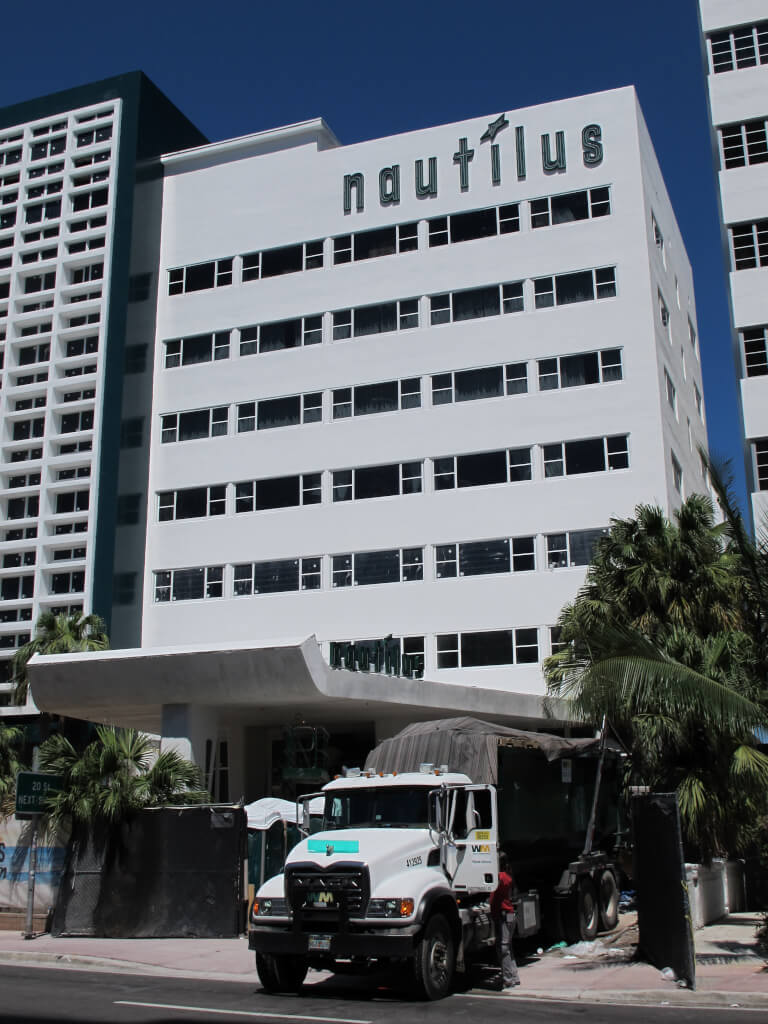 It is interesting that the hotel "Nautilus" was built in the 50s by a famous architect Morris Lapidwho was born in Odessa, in the family of Orthodox Jews. As reported on management company website, it will be a "luxury-style" hotel, and its doors will open for the first guests on July 6 this year.

The relationship between Khodorkovsky and Quadrum was traced thanks to document, posted on the website of the City of Miami Beach. The chain of founding companies leads through companies from Delaware to British offshore companies whose founders are Khodorkovsky and others.

Until recently, this document, dated November 24, 2014, was in the public domain. However, after being published in Forbes on April 1, it was taken down by the site. And on April 6 he appeared there new option, but without the names. 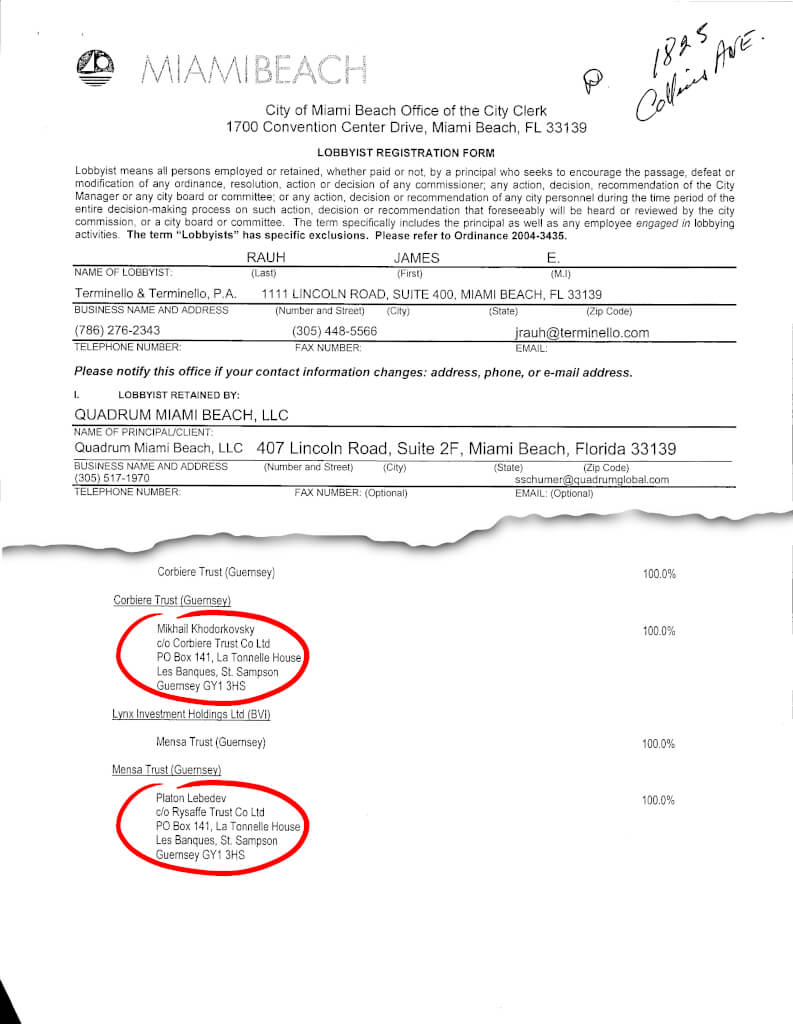 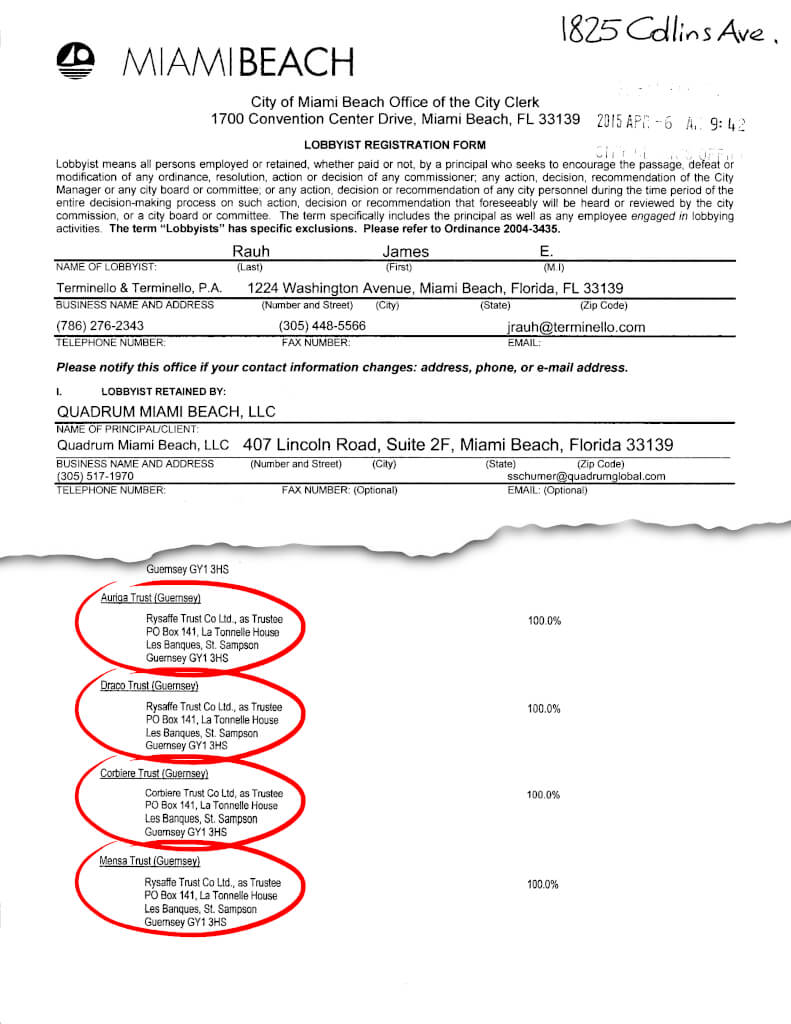 The document presented is called the Lobbyist Report. Lobbyism, as a mechanism of interaction between business and government, was invented in America more than a hundred years ago in order to fight corruption. According to American law, the lobbyist’s activities must be absolutely transparent.

“Anyone can lobby for decisions of the authorities for himself personally,” explains New York lawyer Yuras Zyankovich, “but only an officially registered lobbyist who has received a special status can receive money and lobby in the interests of others. Everything should be public, and therefore the documents are freely available on the website of the city administration. If it turns out that the lobbyist has provided false information, then he will face a substantial fine, the risk of losing his official status, and in special cases, even prison. "

Insite is fully controlled by a businessman from a Miami, Weston suburb named Ben Shmul. He is the founder of other companies that operate under the brand name "B-hotels & resorts"... It is under this name that hotels from the "Quadrum" list are positioned - in Fort Lauderdale и Orlando.

The “Forum” attempted to contact Ben Shmul, but he did not find an opportunity to talk.

The structure of “Miami Beach Nautilus, LP” is more confusing - through a number of parent firms in the Cayman Islands and Guernsey in the English Channel. Guernsey Island is a well-known offshore zone, part of the Crown ownership of the British monarchy, but not part of the UK.

In the end, the owners of the share of this company, on 99.8%, are the former shareholders of Yukos, Mikhail Khodorkovsky, Platon Lebedev, Mikhail Brudno and Vladimir Dubov are equally divided. The remaining 0.2% is controlled by Michael Betley. is he specializes in creating trusts, including in Guernsey, and includes “Top-500” lawyers in the UK.

It is curious that specially trained people from a consulting firm are responsible for all media contacts at Quadrum. "Maitland" from London.

According to the responsible officer James isola, the information published by Forbes is not true, and the Florida Quadrum has nothing to do with Mikhail Khodorkovsky, nor with the other former participants of Yukos or Menatep.

When asked how he could comment on the original Lobbyist Report, Aizola replied that “it was an old document, it was subsequently removed by the city - so it is not on the Miami Beach website.”

Forum attempted to contact lobbyist James Rau, of the law firm Terminello & Terminello, who prepared and submitted the report. There was no answer from him, but the secretary confirmed that their company is indeed engaged in legal support of Quadrum, in particular, it helps to obtain a license to sell alcohol (obviously, this is a license for hotels).

The document with the names of the final beneficiaries, including Khodorkovsky, is no longer on the website of the city administration. There is a new, already without specifying specific names, but because the “Forum” tried to find out the details in the administration of Miami Beach.

“Our task is to collect and publish information provided by the lobbyist. We do not check whether it is correct, it is entirely his responsibility, ”explained Rafael Granado, executive secretary of the city commission. He also noted that the old document is no longer available as the lobbyist replaced it with a new one, which is standard procedure. At the same time, the city administration sent both versions of the document to the Forum. Anyone can get them.

There are other eloquent testimonies that Quadrum could not do without migrants from Yukos, who continue to successfully manage assets around the world.

For example, the financier Oleg Pavlov, who in the early 2000s helped prepare Yukos for an IPO and advised Menatep, Khodorkovsky's banking group, publicly stated that he was involved with the Quadrum project.

In October London 2014 Evening Standard wrote that Oleg Pavlov - a graduate of the Physics Department of Moscow State University, later, a professional banker - has been working in London since 2005, established the "hedge fund" Cube Capital, and is now "focused on the new Quadrum project."

Global Real Estate Institute directly calls Pavlova the founder of "Quadrum". The financier himself on the company's websitewill begin its director. Reuters, in a post about Oleg Pavlov’s transition from Cube to Quadrum, clarified the issue price - 350 million US dollars that were transferred as assets to a new firm.

Olga Pispanen, a spokesman for Mikhail Khodorkovsky, said that he “does not do business and does not comment on it.”