20 most beautiful places in California

California offers some of the most beautiful and impressive sights and places to visit! Just browse for these amazing photos.

Yosemite Falls is a natural waterfall that is the fifth highest in the world. It is best to watch him in May and June, when the snow has just melted.

Störtevent Falls is located in the foothills of the Angeles National Reserve. The height of the waterfall 15 meters, and it looks exceptionally beautiful because of the moss and algae that grow on the rock.

SR1 road California is considered one of the most beautiful. It runs along most of the coast of California and is known throughout the world for its spectacular scenery.

Santa Cruz is the best surfing spot in the United States. The city itself is small, with a population of 50 thousand inhabitants. The beautiful beaches and bohemian atmosphere attract many tourists from all over the world.

Joshua Tree National Park is so named because of the Joshua trees that grow in the park. Visitors can enjoy camping, hiking and mountaineering.

This is the "icon" of San Francisco. There were once twenty-three lines running through the city. Currently, there are only three, and they create a wonderful view.

Pfeiffer Beach is a quiet, beautiful and quirky beach. Locals regularly visit the area, but tourists the beach is practically unknown. The sand here is of an unusual purple color.

Along the coast of the Pacific Ocean stretches the magnificent city of San Diego. There are many beautiful beaches here that make this place fantastic. 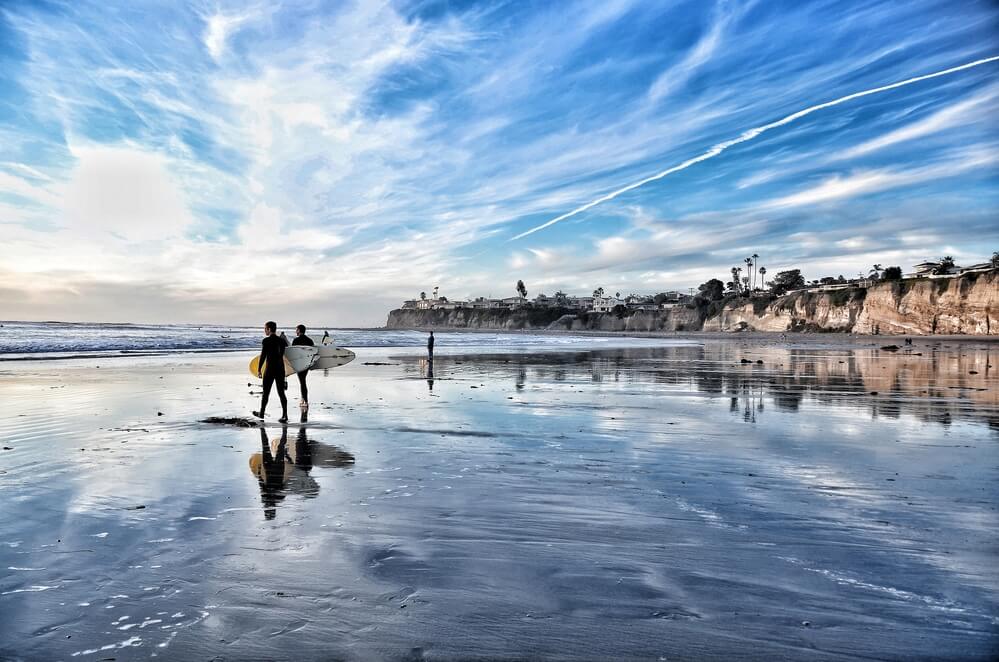 Big Sur means “big south” and is located in the south of the city of Monterey.

The 24 meter high waterfall is located in Julia Pfeiffer Burns Park. Previously, the falling water flowed directly into the ocean, but after the collapse that occurred in 1985, the terrain has changed, and now it is falling into hard-to-reach places.

San Francisco is surrounded by the Pacific Ocean and boasts the stunning Golden Gate Bridge, colorful Victorian houses and the last cable car left. There are many huge skyscrapers in the city. Alcatraz Island with the famous prison is located off the coast.

In Yosemite National Park, you can admire the Vernal Falls, which reaches 96 meters.

Monterey Beaches are several beaches, each one unique.

Emerland is a small island located within Lake Tahoe. The bay is currently considered a National Natural Monument.

The forest is often covered with fog that comes from the shore. The air in it is quite humid even in dry summers.

In northern California, you will find Napa Valley. The area is famous for its beautiful landscapes and legendary winemaking.

The mountain is part of a mountain range and is known as the “Cathedral”. It got its name from the shape of its tall part, which looks like a cathedral.

Les Mariposa is a grove of giant redwoods. Walking through the forest, you will feel like a fairy tale, and you will notice that the trees are getting higher and higher. Some of them have been growing here since 1900.

Giant Rock is located in the Mojave Desert. The largest detached stone in the world, whose height is equal to a seven-story house.

How to make a million: success stories of Ukrainians in the USA

Success story: as a waitress from Kyrgyzstan hit the Forbes rating

She painted Android. The history of Russian women who created one of the most recognizable logos in the world

The glitz and poverty of Brighton Beach: how the legendary "Little Odessa" lives

Lady with a dog. How ex-Kharkiv wore dogs of all Hollywood stars

How Belarusian made business in USA on honey from his homeland