Home Page At home 14 hours without a break: what Zelensky said during a record press conference

President of Ukraine Vladimir Zelensky spoke with representatives of the media in the format of a press marathon - journalists asked him questions in small groups, sitting at the same table. Edition with the BBC told the main thing that the Ukrainian leader was talking about. 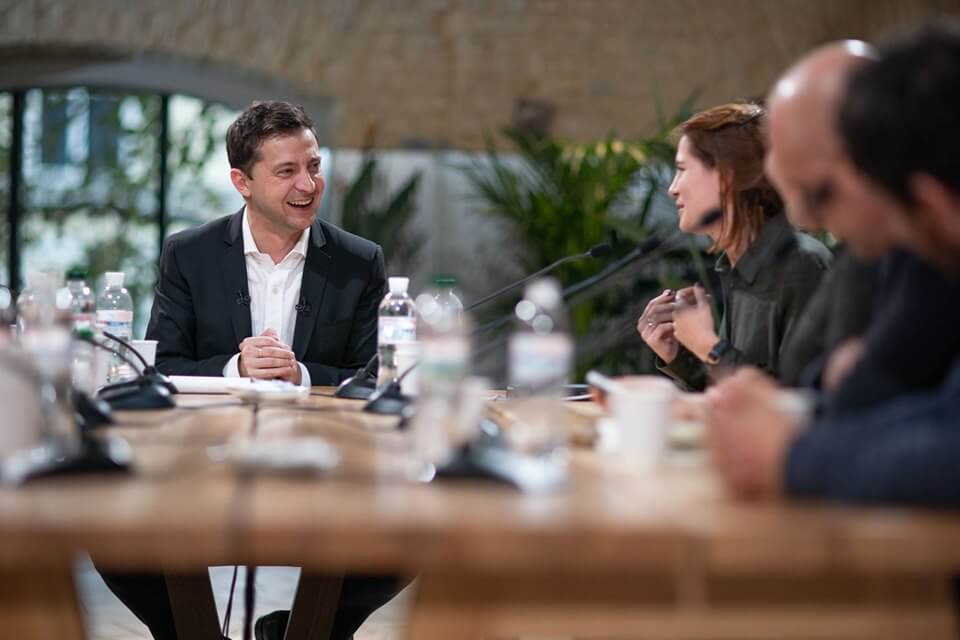 This meeting broke the world record for the duration of presidents 'press conferences - 14 hours Zelensky answered journalists' questions. The press marathon was held at the Kyiv Food Market food court. More than 300 journalists were accredited to it, press secretary Yulia Mendel Zelensky said before the event.

First of all, Zelensky was asked about Donbass. A journalist for Novosti Donbassa asked him how he would reassure the residents of Donetsk and Lugansk.

He added that "plan B is if the return of these territories is delayed, then we must provide them with the opportunity to be here on the territory controlled by Kiev."

On the subject: “Well, you understand”: at a meeting with Zelensky, Lukashenko called Ukraine Russia. VIDEO

When asked who exactly Zelensky considers the parties to the conflict in Donbass, he replied: “Ukraine and Russia”. In his opinion, it is with Moscow that negotiations should be held on the settlement of this conflict.

“I would really not want the conflict in Donbass to be frozen, so that we have Transnistria or Abkhazia. I cannot guarantee you 100% that this will not happen. Because, to be honest, now it is. Now we have practically Transnistria there. There is no relationship, there is at least some humanitarian mission. The only thing that distinguishes the temporarily occupied Donbass from Transnistria or the Abkhazian variant is that we hear shots, ”Zelensky said.

He also commented on the situation in Zolotoy - on one of the three sections of the contact line, on which Minsk agreed to deploy troops (the breeding did not happen due to violations of the silence regime).

“A fool can do it by force,” he replied when asked whether he would authorize forceful dispersal of the opponents of breeding.

In response to another question about the disengagement of troops, Zelensky said: “I am like Van Damme in a particular twine. - then he explained: "I am withdrawing troops where I can ensure security."

USA and conversation with trump

Expectedly, Zelensky was asked a lot of questions about relations with the United States and US leader Donald Trump. Among other things, about their telephone conversation in July, which caused the scandal over which the US president is now facing impeachment.

On the subject: Not only Zelensky: who else did Trump press for personal political purposes

“I said that I was ready to consider the case with Joe Biden's son so that the US attorney would cooperate with ours. I don't mind, ”Zelensky answered when asked whether he asked the attorney general to consider the Biden case at Trump's request.

The journalist asked him three times if he considers Trump’s corruption a request to investigate the activities of the Ukrainian oil and gas company Burisma, which worked for Biden’s son, Trump’s potential rival in the upcoming presidential election. Zelensky said three times that he would not like to comment on the statements of Trump.

“I believe that I have not violated the law of Ukraine. I want what Trump said to comment on US law, not me. Otherwise, it will be interference in the US election process, Zelensky said. "I will not give you the opportunity to change my position, which I have chosen for myself as honest."

“There was no pressure from Trump,” he concluded.

“We are not service personnel, we are independent Ukraine. We cannot support any American politician. And if every day you involve Ukraine in your problems, it will be a big problem for the United States and for our relations. With all due respect, I will not talk about Trump every day. We have our own problems, ”Zelensky stressed.

Russia, Putin and the exchange of prisoners

During a conversation with reporters, Zelenskiy complained that the fate of Crimea, annexed by Russia in 2014, is not being discussed either at the Minsk talks or in the Normandy format: "There is no discussion of this issue now."

From his words it was possible to conclude that he was going to raise the issue of the return of Crimea during the negotiations of the "Normandy Four".

On the subject: Trump asked Zelensky to investigate the activities of Biden’s son in Ukraine: what did he do in the country

In addition, at the meeting in the "Normandy format", according to Zelensky, a decision will be made to continue the process of exchange of prisoners between Ukraine and Russia. Zelensky said this, answering the question of whether Crimean Tatars who are under arrest in Crimea will be included in the exchange lists.

“Do you think Trump spoke to you respectfully? And will President Putin talk to you like that? " One of the journalists asked Zelensky.

“As for Putin, I choose a format of communication with him that would help achieve a result,” Zelensky said.

What were upset and happy about social networks?

The marathon provoked a lively reaction on the Internet.

“Perhaps, based on what I see, I personally like Zelensky. Yes, there are too many “I don’t know”, but this is definitely better and more honest than the cheerful lie that we have been hearing in the Russian Federation for 20 years already ”, - assures Russian opposition photographer Vasily Maximov.

“Surprisingly, despite all the zashkvary, Zelensky looks decent enough against the background of our underpressure,” - suggest in the account @vll1ua.

On the Internet, they monitored not only Zelensky’s statements, but also how journalists were allowed or not allowed to marathon.

On the subject: How Trump and Zelensky's telephone conversation led to a political scandal in the USA

“The narcissism of some journalists is striking - Sonya Koshkina in Telegram hints that she could become the“ highlight ”of today's press conference, but she was not allowed, poor fellow. Zelensky is a petty statesman of the Koshkina era, isn't he? " - ironic user @Reo_An.

She herself, who wrote a book about Maidan Koshkin, assured the audience that she was not upset due to the inadmissibility.

“I was told that“ but we read your Telegram (recognition, I believe) and “we accredited your journalist - do you want us to delete your journalist and record you?” So funny, by God. They think I will arrange a showdown, "shuffle" my own guys ", - laughs publicist.

“Well, you understand”: at a meeting with Zelensky, Lukashenko called Ukraine Russia. VIDEO

'There is no surrender in it': Ukraine and Russia signed a peace plan for Donbass